Lance Robertson net worth: Lance Robertson is an American musician, DJ and actor who has a net worth of $2 million. Lance Robertson is probably most famous for playing the character of DJ Lance Rock on the award-winning show Yo Gabba Gabba! This airs on the Nick Jr channel. Lance was born in St. Louis, Missouri and graduated from Hazelwood East high School in 1983. In the 1990's he was the lead vocalist for a local electronic band known as My Other Self as well as the owner of the record store Deep Grooves. He worked at Amoeba Records in Los Angeles; he has a local band named The Raymakers. He teamed up with Scott Schultz and became part of the indie pop group based in Orange county Majestic. Shultz was also the co-creator of the show Yo Gabba Gabba!. In which Robertson became the co-host. He also toured with the group The Aquabats where he performs kid-friendly DJ sets and dances with the monster cast of the series. Lance plays the guitar, and has built his career around the entertainment of children. The series Yo Gabba Gabba!" earned the Television Critics Association Award for Outstanding Achievement in Youth Programming. This is the second year in a row that this series has received this award. 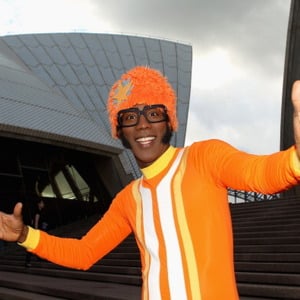