However, one of her instructors told her that she would never make it as an actress, so she left the conservatory and moved to France to work as an au pair. Fluent in French as well as English, she went on to study at the Ecole nationale supérieure des arts et techniques du theater in Paris. Immediately after graduating, she was cast opposite Prince in the film, "Under the Cherry Moon". She has since gone on to appear in such projects as "A Handful of Dust", "The Tenth Man", "Bitter Moon", "Four Weddings and a Funeral", "Angels & Insects", "The English Patient", "The Horse Whisperer", "Gosford Park", "Tell No One", "Nowhere Boy", and "Salmon Fishing in the Yemen". She has been nominated for numerous awards, including an Oscar, and regularly works in French film and the theater, in addition to her English-language projects. 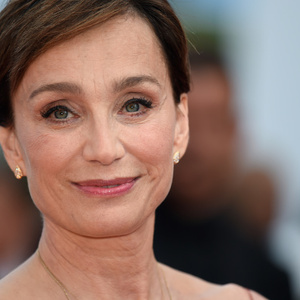