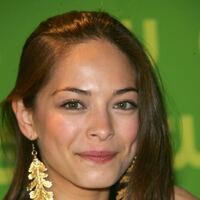 Kristin Kreuk net worth and salary: Kristin Kreuk is a Canadian actress who has a net worth of $4 million. Born in Vancouver, British Columbia, Kristin Kreuk was a competitive martial artist and gymnast, but chose to shift her focus during her junior year of high school. She began her professional career starring in a television movie adaptation of "Snow White". She then began appearing on the Canadian soap opera, "Edgemont". While on "Edgemont", she also booked the role that would bring her the most widespread fame, as Lana Lang on "Smallville". From 2001-2003, she appeared on both shows, and then continued on "Smallville" through its eight season. In addition to her work on "Smallville", she also appeared in the films, "EuroTrip", "Partition", and "Street Fighter: The Legend of Chun-Li". She also starred in the mini-series, "Earthsea". Since completing her run on "Smallville", she has appeared in such projects as "Chuck", "Ben-Hur", and the movie, "Vampire". She is the star of the new CW series, "Beauty and the Beast".