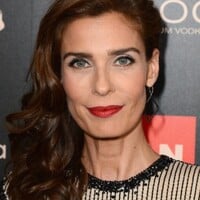 Kristian Alfonso net worth: Kristian Alfonso is an American actress, model, and former figure skater who has a net worth of $5 million. Kristian Alfonso was born in Brockton, Massachusetts, and was a champion figure skater. She earned a Gold Medal at the Junior Olympics when she was in her early teens. She was subsequently severely injured in an accident while tobagganing, and was forced to give up skating. She shifted her focus to modeling and over the course of the next two years, appeared on the covers of over 30 magazines, such as Vogue and Harper's Bazaar. She began her professional on-camera career in 1981, appearing in the TV movie, "The Starmaker". In 1983, she was cast in the role that would make her a household name, as Hope Williams Brady on "Days of Our Lives". She has played the role off and on to this day. In addition to her work on "Days of Our Lives", she has also guest-starred on "MacGyver", "Full House", "Murder, She Wrote", "Melrose Place", and "Who's the Boss", among other programs.