How much is Kristen Schaal Worth?

Kristen Schaal net worth: Kristen Schaal is an American actress, voice over artist, comedian, and writer who has a net worth of $6 million dollars. Kristen is probably best-known for appearing in "Flight of the Concords", "The Daily Show" and "Bob's Burgers."

Kristen Schaal was born in Longmont, Colorado, and graduated from Northwestern University. She moved to New York City to focus on a career in stand-up comedy after college, and by the mid-2000s, she'd begun to make a name for herself. New York Magazine included her in their "The Ten Funniest New Yorkers You've Never Heard Of" list, and in 2006, she won "Best Alternative Comedian" at the HBO US Comedy Arts Festival in Aspen. In addition to her growing fame as a stand-up comedian, she was cast on the hit show, "Flight of the Conchords". Though she had guest starred on multiple shows for years, "Flight of the Conchords" brought her national attention. She has since gone on to appear in such film and television projects as "Horrible People", "Snake n' Bacon", "When In Rome", "Valentine's Day", and "Wilfred", in addition to providing voice work for many, many animated projects. 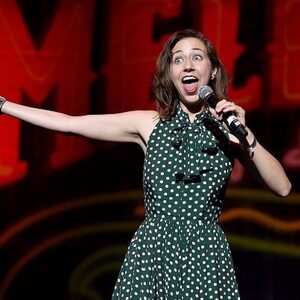