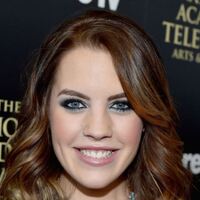 Kristen Alderson net worth: Kristen Alderson is an American actress and singer who has a net worth of $3 million. Kristen Alderson was born in Huntington Valley, Pennsylvania in May 1991. She is best known for playing the role of Starr Manning on the ABC soap opera One Life to Live. At the age of six she landed the role of Starr Manning and has played the character since 1998. She played the role on the TV series One Life to Live from 1998 to 2012 and then on General Hospital since 2012. For her role she won a Soap Opera Digest Award for Favorite Teen in 2005. Alderson also won a Daytime Emmy Award for Outstanding Younger Actress in a Drama Series in 2013 and was nominated for the same award in 2014. She has also been nominated for four Young Artist Awards. It was reported in January 2015 that Alderson decided to leave General Hospital and did not renew her contract. Kristen dated her General Hospital co-star and on –screen love interest Chad Duell from 2012 to 2015.