Her critically acclaimed portrayal of a struggling actress in the hit Luck by Chance (2009) opposite Farhan Akhtar also helped establish her commercial success. Praising her performance in the film, noted film Critic Nikhat Kazmi of Times of India wrote, "The highpoint of the film are its performances, Konkona is a complete natural before the camera. She made her screen debut as a child in the film Indira (1983) and debuted as an adult in the Bengali thriller Ek Je Aachhe Kanya (2000). She went on to appear in such other projects as Ashwani Dheer's comedy Atithi Tum Kab Jaoge opposite Ajay Devgan and Paresh Rawal (2010), Aparna Sen's Iti Mrinalini (2011), Balaji Telefilms' Ek Thi Daayan (2013) among others. she performed on a theater stage for the first time in 2009 when she appeared in Atul Kumar's The Blue Mug alongside Rajat Kapoor, Vinay Pathak, Ranvir Shorey and Sheeba Chadha. In 2010, the play was toured around the nation and abroad. Konkona Sen Sharma began dating actor and costar Ranvir Shorey in 2007 and the couple married in September of 2010 in a private ceremony. The Times of India reported that Konkona Sen Sharma gave birth to her first child, Haroon, on March 15, 2011 at a South Mumbai hospital. 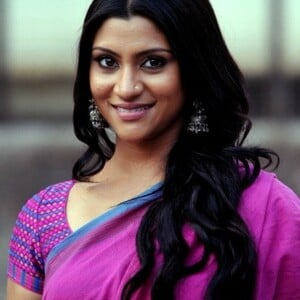