How much is Kirk Douglas Worth?

Kirk Douglas net worth: Kirk Douglas was an American actor, producer, author and philanthropist who had a net worth of $60 million at the time of his death. Kirk Douglas was the father of actor/producer Michael Douglas. Kirk's fortune would have been much higher, but about a decade before his death he chose to give away tens of millions of dollars through The Douglas Foundation. In the last few years of his life alone, Kirk's foundation gave away $50 million to support various charities like Children's Hospital Los Angeles. They also gave an estimated $40 million to Harry's Haven, an Alzheimer's facility in the LA suburbs. That includes $15 million that he gave Harry's Haven on his own 99th birthday to establish the Kirk Douglass Care Pavilion.

Early Life: Douglas was born Issur Danielovitch on December 9, 1916, in Amsterdam, New York. He was the son of Byrna "Bertha" (1884-1958) and Herschel "Harry" Danielovitch (1884-1950). His parents were Jewish immigrants from a part of the Russian Empire that today is Belarus. The family spoke Yiddish at home. His father's brother immigrated earlier than Kirk's family and used the surname Demsky, which his parents also adopted. He grew up Izzy Demsky. He legally changed his name to Kirk Douglas before entering the U.S. Navy during World War II.

Douglas grew up impoverished. He had six sisters. Douglas sold snacks to mill workers to make enough money to buy milk and bread and help his family. He delivered newspapers. In all, Douglas had more than 40 jobs before becoming an actor. He discovered acting at a young age and by high school, he knew he wanted to become a professional actor. He talked his way into the dean's office at St. Lawrence University, and, unable to afford college tuition, showed him a list of his high school accomplishments and honors. He was given a loan to pay tuition which he paid back by working as a gardener and janitor part-time while in college. He was a star on the college's wrestling team and one summer wrestled in a carnival to make money. He graduated with a bachelor's degree in 1939.

Douglas's acting was noticed at the American Academy of Dramatic Arts in New York City and he was given a special scholarship to attend. One of his classmates was Betty Joan Perske, better known as Lauren Bacall. They dated casually and she played an important role in launching his film career. Another classmate and friend of Bacall's was aspiring actress Diana Dill, who later became Kirk's first wife.

Douglas joined the Navy in 1941, shortly after the U.S. entered World War II. He was a communications officer in anti-submarine warfare on the USS PC-1137. He was medically discharged in 1944 for injuries sustained from the accidental dropping of a depth charge.

Acting Career:  After the war, Douglas returned to New York City and found work in radio, commercials, and theater. In his radio work, he acted in soap operas and saw those experiences as being especially valuable in helping in develop his skill in using one's voice, which is important for aspiring actors. His stage break occurred when he took over the role played by Richard Widmark in 1943's Kiss and Tell, which then led to other offers. He planned to remain a stage actor until Lauren Bacall helped him get his first film role by recommending him to producer Hal B. Wallis who cast in him 1946's The Strange Love of Martha Ivers opposite Barbara Stanwyck. He played a young, insecure man who was dominated by his ruthless life. This was the first and last time Douglas ever played a weak man in a film.

Douglas developed into a leading box-office star throughout the 1950s, known for serious dramas, including westerns and war movies. During his career, he appeared in more than 90 movies. Douglas was known for his explosive acting style. He became an international movie star for his leading role as an unscrupulous boxing hero in 1949's Champion. The role brought him his first nomination for the Academy Award for Best Actor. Other early films include 1950's Young Man with a Horn, which also starred Lauren Bacall and Doris Say, 1951's Ace in the Hole and Detective Story. The latter earned him a Golden Globe nomination for Best Actor in a Drama. 1952's The Bad and the Beautiful got him his second Oscar nomination. He got his third Oscar nomination and his second Golden Globe nomination for his role as Vincent van Gogh in 1956's Lust for Life.

One of his best-known roles was 1960's Spartacus which was directed by the then-unknown Stanley Kubrick. Douglas played a crucial role in ending the Hollywood blacklist in 1960 by hiring a blacklisted screenwriter. In 1963 he starred on Broadway in One Flew Over the Cuckoo's Nest (a story he purchased and gave to his son Michael who, of course, turned it into an Oscar-winning film).

Douglas has over 90 acting credits to his name. Some of his more popular movies include Champion, 20,000 Leagues Under the Sea, Gunfight at the O.K. Corral,  and Tough Guys. The American Film Institute named Douglas as #17 on their list of the greatest male screen legends in American film history. He was given the  Honorary Academy Award in 1996 for having 50 years in the motion picture community. He is a recipient of the Presidential Medal of Freedom. He has a star on the Hollywood Walk of Fame. He received lifetime achievement awards from the Screen Actors Guild and AFI.

While on location in Paris filming Lust for Life, he met producer Anne Buydens. She had escaped Nazi Germany and worked at a film studio doing translations for subtitles. They married on May 29, 1954. They had two sons, Peter, a producer, and Eric, an actor. Eric died of an overdose of drugs and alcohol on July 6, 2004.

At the time of Kirk's death, he and Anne had been married for 65 years.

In February 1991, Douglas was in a helicopter that collided with a small plane over Santa Paula Airport in California. Douglas and two other people were injured and two people in the plane were killed. The near-death experience led Douglas to rediscover the Jewish faith he grew up with.

On January 28, 1996, he suffered a severe stroke, which impaired his ability to speak. Doctors told his wife and family that unless there was quick improvement, his loss of speech was likely permanent. After intense daily speech therapy for several months, his ability to speak returned, although it was still limited.

Philanthropy: After the helicopter accident, Kirk decided to dedicate himself more proactively to philanthropy. Back in 2012, Kirk asked his wife (who kept their books and managed their family trust), "How much money do we have in that?" Her answer? "$80 million." His response? "I want to give it away." And that is precisely what he did.

The Douglas Foundation gave away more than $50 million to various charities. They set up a scholarship at St. Lawrence University (his alma mater), the Westwood Sinai Temple and Children's Hospital Los Angeles.

Death: On February 5, 2020, Kirk Douglas died at his home in Beverly Hills. He was 103-years-old. Douglas was one of the last surviving stars of the film industry's Golden Age. He is survived by his 100-year-old wife, Anne, his sons Michael, Joel, and Peter, as well as several grandchildren and one great-grandchild.

Real Estate: In 1999, Douglas and his wife sold their Palm Springs retreat for $1.3 million. Douglas bought the home in the late 1950s and used it as the family retreat for decades. The 4,000 square foot midcentury modern home features walls of floor-to-ceiling windows, five bedrooms, eight bathrooms, and a pool. 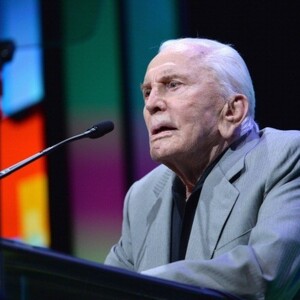