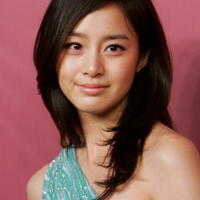 Kim Tae-hee Net Worth: Kim Tae-hee is a South Korean actress who has a net worth of $16 million. Kim Tae-hee was born March 29, 1980 in Ulsan, South Korea. She is best known for her roles in Korean dramas such as Stairway to Heaven, Love Story in Harvard, Iris, My Princess and Jang Ok-jung, Living by Love. In 1999, Kim moved to Seoul to attend college at the prestigious Seoul National University where she became the president of the SNU Women's Ski Club. In 2005, she graduated from SNU with a bachelor's degree in Fashion Design. In 2000, an advertising executive spotted her riding the subway and offered her a modeling job. Kim Tae-hee subsequently appeared in television commercials and print ads before making her acting debut in a small role on the 2001 melodrama Last Present. In 2002, she starred in the short film Living in New Town and the sitcom Let's Go, followed by Screen and A Problem at My Younger Brother's House in 2003. In late 2003, she got her first real break with her portrayal of the evil stepsister in the popular SBS TV series Stairway to Heaven. In 2004, she was cast in leading roles in the supernatural KBS series Forbidden Love and the SBS campus romance Love Story in Harvard. Tae-hee has become one of the most popular and in-demand product endorsers in Korea, becoming spokesperson for popular brands to include 12Plus Colorista, Cyon, Paris Baguette, LG, iriver, Hera, Ohui, Vivian, Daewoo Matiz, Klasse, Samsung, Beans Avenue, Olympus, My House/Root, Crencia, KT Smard Card, Calli, ZEC, BC Card, Maxwell House, S-Oil, Corn Silk Tae, Toyota and Prugio.