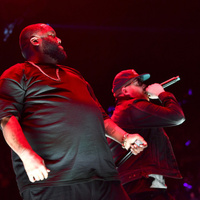 Killer Mike Net Worth: Killer Mike is an American hip hop recording artist and actor who has a net worth of $5 million. Killer Mike was born in Atlanta, Georgia in April 1975. Killer Mike is the founder of Grind Time Official Records. His debut came on the track "Snappin' and Tappin'" on OutKast's 2000 album Stankonia. Mike later appeared on OutKast's Grammy winning single "The Whole World" from their greatest hits album. Killer Mike signed to rapper T.I.'s Grand Hustle Records in 2008. His debut studio album Monster was released in March 2003 and reached #4 on the US R&B and #10 on the Billboard 200 charts. He has released six solo studio albums with his latest R.A.P. Music coming in 2012. Killer Mike has also released the albums Run the Jewels in 2013 and Run the Jewels 2 in 2014 with rapper-producer El-P. He has also released four mix tapes. Mike's best known single is "A.D.I.D.A.S" (featuring Big Boi and Sleepy Brown) which charted in the US, Ireland, New Zealand, and the UK. Mike opened Graffiti's SWAG Barbershop in 2011. He has appeared in the movies 20 Funerals, Idlewild, and ATL.