Kevin Conroy net worth: Kevin Conroy is an American actor and voice over artist who has a net worth of $10 million dollars. Kevin Conroy was born in Westbury, Connecticut, and went on to graduate from Juilliard, where he earned a degree in Drama. His classmates and roommates included Christopher Reeve, Robin Williams, and Kelsey Grammar.

He began his professional acting career in the theater, touring with the Acting Group, and appearing in the National Tour of "Deathtrap". After relocating to California, he began adding guest starring and co-starring roles on television shows and in television movies to his resume, while continuing to appear in theater productions at the Old Globe Theater in San Diego. Some of his on-camera credits include, "Another World", "Search for Tomorrow", "Dynasty", "Tour of Duty", and "Island City". He is most widely recognized for his very successful voice over career. He has voiced Bruce Wayne/Batman in nearly 30 cartoon series, cartoon specials, animated movies, and video games, as well as voicing other characters in a variety of projects, including Alien X, Lord Palasa, and Lord Jack. 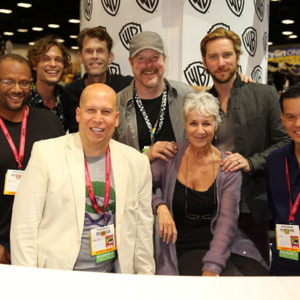