Keri Russell Net Worth: Keri Russell is an American actress and dancer who has a net worth of $12 million. Russell is perhaps best known for playing the role of Felicity in the WB drama "Felicity," although she has landed a number of additional roles over the years. After appearing in "The Americans," Keri was nominated for an Emmy and a number of Golden Globe Awards. Outside of television, Russell has appeared in a wide range of films, including "Star Wars: The Rise of Skywalker" in 2019. In 2017, Keri was given a star on the Hollywood Walk of Fame.

Early Life: Keri Lynn Russell was born on March 23rd of 1976 in Fountain Valley, California. Raised alongside two siblings, Keri moved around the nation frequently with her family. Her father was a Nissan Motors executive, and the family spent time living in Texas, Arizona, and Colorado due to the demands of her father's work. During her youth, Russell fell in love with the performing arts, particularly dance.

Career: At the age of 15, Keri's dancing talents won her a spot on the "All-New Mickey Mouse Club" variety show on the Disney Channel. She appeared on this show from 1991 to 1994, and it helped launch her entertainment career. By the age of 16, she had booked her first major movie role in "Honey, I Blew Up the Kid." In 1993, she established herself as a television actress at the age of 16 with a recurring role in the sitcom "Boy Meets World."

Russell made another notable appearance in a 1995 episode of "Married… with Children." Although Keri was still just a teen, she had already established herself in the entertainment industry. A number of roles followed in both TV and film projects throughout the late 90s, and include the made-for-television film "The Babysitter's Seduction." In terms of television work, she appeared in the soap opera "Malibu Shores" and the series "Roar." During this period, also appeared in music videos. One notable example was Bon Jovi's music video for "Always," in which the 18-year-old Russell appeared as 'the other woman.'

Russell's real breakthrough came in 1998 when she booked the title role in the series "Felicity." The series is based on the college experiences of a fictional character named Felicity Porter, and it received strong reviews. Many publications included the series in their lists of the best TV shows of all time, and it is considered one of the best 'school shows' ever made. Russell was singled out for praise, and her character was once called one of the '100 Greatest Characters of the Last 20 Years.'

"Felicity" was also nominated for 38 awards during the course of its four-year run. The series won an Emmy Award for Outstanding Cinematography for a Series, a People's Choice Award,  Russell won a Golden Globe for Best Actress, an OFTA Television Award, and a Teen Choice Award. She was also nominated for a number of additional awards. Many people believe that Keri's decision to change her hairstyle midway through the show caused ratings to drop, as her long, curly hair initially proved to be a hit with fans.

Even while she was preoccupied with "Felicity," Russell still had time to appear in films like "Eight Days a Week," "The Curve," and "Mad About Mambo," although these all had limited releases. Two months before the end of "Felicity," Keri booked a role in the mainstream film "We Were Soldiers," playing the wife of a US serviceman during the Vietnam War. Although the film had a large budget of $75 million, it managed to become profitable at the box office with earnings of $115 million. The film also received strong reviews.

After "Felicity" finally came to a close, Russell relocated to New York City and ventured into stage acting. Her Broadway debut came in 2004 with a production of "Fat Pig." By 2005, she was ready to return to work in front of a camera. After appearing in the TV movie "The Magic of Ordinary Days," Keri appeared in "The Upside of Anger," and the miniseries "Into the West." Also in 2005, Russell joined the cast of "Mission: Impossible III."

In 2006, Russell won a brand endorsement deal with CoverGirl cosmetics and subsequently appeared in a reality show sitcom sponsored by CoverGirl. In 2007, Keri played the role of Melody in "Scrubs." Over the years, Russell has become notorious for playing pregnant women. She did so for the fourth time in the film "Waitress" and won widespread critical acclaim for her performance. More film roles during this period came with movies like "Grimm Love" and "The Girl in the Park."

By the end of 2007, Russell had booked another role in the film "August Rush," and she also appeared on the cover of the "Page Six" magazine. In 2008, she booked a role in Adam Sandler's family-oriented film "Bedtime Stories." Keri also starred in the 2010 medical drama film "Extraordinary Measures." During the next year or so, she appeared in "Running Wilde" with a recurring role.

Another noteworthy chapter of Keri Russell's career began in 2013 when she started playing Elizabeth Jennings in the FX drama series "The Americans." She played a Russian spy living in America during the Cold War. During this period, she fell in love with her co-star Matthew Rhys, who was portraying her on-screen husband at the time. The series ended after six seasons.

During her time with "The Americans," Keri found the time to appear in films like "Dark Skies," "Austenland," "Dawn of the Planet of the Apes," and "Rise of the Planet of the Apes." The latter two films were commercially successful. In 2016, she appeared in "Free State of Jones." After the end of "The Americans," Russell booked a role in the film "Star Wars: The Rise of Skywalker." Keri continues to appear in Broadway productions, and in 2018 she starred as Anna in "Burn This." In addition, Russell is an established voice actress who has played Wonder Woman in a number of animated projects.

Relationships: After a number of years of dating, Keri Russell became engaged to a contractor named Shane Deary. After marrying in 2007, the pair had two children together and raised their family in New York for five years. In 2013, Deary and Russell separated, and their divorce was finalized by 2014.

Shortly after divorcing Shane Deary, Keri started a relationship with Matthew Rhys, who was appearing alongside her in "The Americans." Over the course of their relationship, Rhys and Russell have welcomed one child into the world. 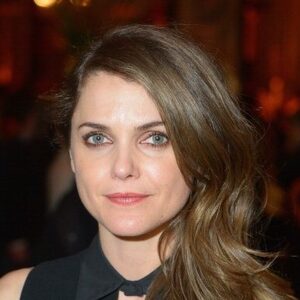