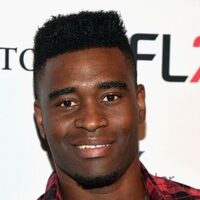 Keo Motsepe net worth: Keoikantse "Keo" Motsepe is a South African professional dancer who has a net worth of $300 thousand dollars. At the age of eleven, Keoikantse Motsepe represented his home county of South Africa in international Latin Ballroom dance competitions, reigning for eight straight years as the South African Latin Dance Champion. In 2012, Keo made history by becoming the first South African to join the Burn the Floor world tour and now is making history once again by becoming the first South African to join the hit television series, Dancing with the Stars. He was born in Pretoria, South Africa and raised in nearby Johannesburg. He started dancing at the age of 5 after a friend brought him to a neighborhood dance studio. At this studio, he learned his love for Latin Ballroom Dancing and spent his youth in amateur dance competitions.  In 2012 he was invited to join the cast of the internationally acclaimed, theatrical dance sensation Burn the Floor. His electrifying moves quickly captured the attention of producers and before long he was named the cast's male principle dancer, hand-picked to perform as a soloist during the show's residency at the Shaftesbury Theatre in the West End. In 2014, Keo toured with Burn the Floor as principal dancer on the Australian and Japanese tours. He also performed on their weekly productions aboard Norwegian Cruise Line's "Getaway" cruise. Keo made his television debut performing on Strictly Come Dancing South Africa in 2013. In June 2014, during his tenure in Australia with Burn the Floor, Keo had the opportunity to audition for ABC's Dancing with the Stars. One month later, Keo got the call that not only would he be joining the show, but that he had been selected as one of the Pro Dancers for the 2014 season.