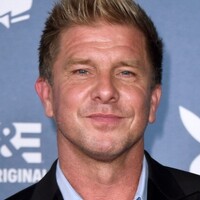 Kenny Johnson Net Worth: Kenny Johnson is an American actor who has a net worth of $3 million dollars. Kenny Johnson hails from New Haven, Connecticut and is best known for his work on The Shield, where he played a detective named Curtis Lemansky. Johnson has also played law enforcement officers on various other shows, including Cold Case and Saving Grace. His additional appearances include Sons of Anarchy, Prime Suspect, Burn Notice, and Dexter, which he played U.S. Marshal, Max Clayton. He got his start on camera at a young age appearing in various television commercials, including one for LA Gear, a popular clothing brand throughout the 80s and 90s. Johnson also made various guest appearances on popular sitcoms, including Family Matters and Wings. Aside from acting, he is an accomplished arm wrestler, having won a number of titles for his talent. Johnson then went on to appear in multiple other TV shows and films, finding a niche playing law enforcement officers for various departments. These law-based characters have accounted for a majority of his roles in recent years, which have spanned a number of real-life departments. Since December of 2005 he has been married to Cathleen Overson. Together the couple has one child.