Kenny Baker net worth: Kenny Baker was an English actor and musician who had a net worth of $2 million at the time of his death. Kenn was best known for his portrayal of R2-D2 in the Star Wars franchise of movies. He and Anthony Daniels, the actor who played C-3PO, are the only actors to have a role in all six original Star Wars films.

Baker stood 3 ft 8 inches tall. He was born and educated in Birmingham U.K. His parents were of average height. He is the only child in his family and wanted to follow in his father's footsteps and become an engraver, but he did not receive sufficient education to do so so he pursued a career in the entertainment industry. He worked for a time in a theatrical troupe of dwarves and later joined a circus for a brief time. He formed a successful comedy act called Minitones with Jack Purvis and shortly after, George Lucas hired him to be the man inside R2-D2 in the first Star Wars film in 1977. Baker appeared in all of the Star Wars films and had an extra role in Return of the Jedi as "Paploo," the Ewok who steals an Imperial speeder bike.

During the British television series, Bring Back Star Wars, Baker revealed a feud between him and the actor who plays C-3PO, Anthony Daniels. Baker claimed Daniels has been rude to him on a number of occasions and stated that Daniels is rude to everyone, including fans. In addition to his work in Star Wars, Baker has also appeared in films like The Elephant Man, Time Bandits, Willow, Flash Gordon, Amadeus, and Labyrinth. In 2015, Baker reprised his role R2-D2 in Star Wars Episode VII, The Force Awakens.

He was married to Eileen Baker from 1970 until the time of her death in 1993 and the couple had two children. Their children did not inherit their parents dwarfism. Anthony died on August 13, 2016 at the age of 81. 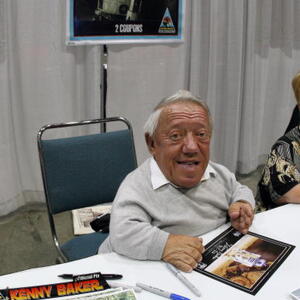