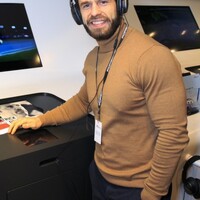 Kelvin Fletcher net worth: Kelvin Fletcher is an English actor and model who has a net worth of $5 million. Kelvin Fletcher was born in Oldham, Greater Manchester, England in January 1984. He is best known for playing Andy Sugden in the soap opera Emmerdale. At seven years old Kelvin took drama classes at the Oldham Theatre Workshop. Fletcher was a National Champion in the sport of Inline Hockey. His best known role has come starring as Andy Sugden on the television series Emmerdale since 1996 and Fletcher has appeared in more than 1,100 episodes of the show. In 1994 he starred as Darren on the TV series Three Seven Eleven. Fletcher has won British Soap Opera Awards for Best Dramatic Performance and Most Spectacular Scene on Emmerdale. He has also done some racing and competed in the Porsche Carrera Cup Great Britain and the Porsche Supercup series.