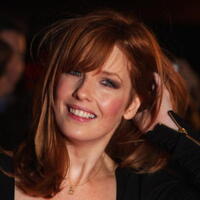 Kelly Reilly Net Worth: Kelly Reilly is an English actress who has a net worth of $5 million. Born in Surrey, England, in 1977, Kelly Reilly started pursuing her acting career when she was a teenager. She made her on-screen debut in "Prime Suspect: Inner Circles" as Polly Henry and appeared in "The Biz" in 1995. Reilly scored several small TV parts, including appearances in "The Ruth Rendell Mysteries", "Poldark", "Pie in the Sky", "The History of Tom Jones, a Foundling", "Christen of the New Forest", and "Wonderful You" before making her feature film debut in 2000's "Maybe Baby" as Nimnh. She appeared in dozens of movies, including "Last Orders", "Dead Bodies", "Pride & Prejudice", "Me and Orson Welles", "Sherlock Holmes", "Eden Lake", "Edwin Boyd: Citizen Gangster", "Sherlock Holmes: A Game of Shadows", "Innocence", and "Heaven Is For Real". Reilly's major TV roles came in the "Above Suspicion" franchise as Anna Travis; she starred in four installments of the series, including "Above Suspicion 2: The Red Dahlia", "Above Suspicion: Deadly Intent", and "Above Suspicion: Silent Scream". Reilly also landed the starring role as Dr. Catherine Black on 2014's "Black Box". She is an award-winning actress, earning Best Newcomer at the Cannes Film Festival for "The Russian Dolls" in 2005. She has also earned several nominations for her stage work, including a Best Actress nod at the Laurence Olivier Theatre Awards for her performance in a production of "After Miss Julie". Reilly has been married to her husband, financier Kyle Baugher, since 2012. In 2015 she starred on the TV series True Detective.