Kathy Bates Net Worth: Kathy Bates is an American actress and director who has a net worth of $20 million dollars. Bates is known for her performances both onscreen and onstage, appearing in more than 120 film and television projects as well as Broadway productions of "Fifth of July" (1980), "Come Back to the Five and Dime, Jimmy Dean, Jimmy Dean" (1982), and "'night. Mother" (1983–1984), for which she received a Tony-nomination.

Early Life: Kathy Bates was born Kathleen Doyle Bates on June 28, 1948, in Memphis, Tennessee. Her mother, Bertye, was a homemaker, and her father, Langdon, was a mechanical engineer. Kathy grew up with two older sisters, Patricia and Mary, and she attended White Station High School. After graduating early, she enrolled at Southern Methodist University in Dallas. As a college student, Bates joined the Alpha Delta Pi sorority and studied theatre, earning a Bachelor of Fine Arts degree in 1969. In 1970, Kathy decided to pursue an acting career in New York City, and she began taking classes at the William Esper Studio.

In 1990, Kathy landed the role that would change her life: obsessed fan Annie Wilkes in "Misery." She earned critical acclaim and an Oscar and Golden Globe for her performance, and Wilkes was ranked #17 on the American Film Institute's "100 Heroes and Villains" list. Bates would star in another Stephen King film, "Dolores Claiborne," in 1995. In 1991, she played Evelyn Couch in "Fried Green Tomatoes" and earned a Golden Globe nomination, and she was nominated for her first Primetime Emmy in 1996, for her portrayal of Helen Kushnick (Jay Leno's manager) in the HBO film "The Late Shift." In 1997, Kathy played Molly Brown in "Titanic," one of the most commercially successful films of all time with a worldwide gross of $2.195 billion. She earned another Academy Award nomination for the 1998 political film "Primary Colors" and received Emmy nominations for Outstanding Guest Actress in a Comedy Series for "3rd Rock from the Sun" and Outstanding Directing in a Miniseries or Movie for "Dash & Lilly" in 1999. That year, Bates also played Miss Hannigan in an ABC remake of "Annie" and earned an Emmy nomination for Outstanding Supporting Actress in a Miniseries or a Movie.

Personal Life: Kathy married Tony Campisi in April 1991, after 13 years together, and they divorced in 1997. In 2003, Bates was diagnosed with ovarian cancer, but it was not public knowledge until January 2009 when she stated that she had been "in total remission" for more than five years. She was diagnosed with breast cancer in July 2012 and underwent a double mastectomy. Two years later at the New York Walk for Lymphedema & Lymphatic Diseases, Kathy revealed (in a pre-recorded message) that she has lymphedema in her arms as a result of the double mastectomy, and she began serving on the Lymphatic Education & Research Network's honorary board as a chairperson later that year. Bates also became a spokesperson for lymphedema, and in 2018, she took part in Capitol Hill Lobby Day in an attempt to get more research funding for the condition and spoke at the DC/VA Walk to Fight Lymphedema & Lymphatic Diseases. She was honored with a 2018 WebMD Health Heroes "Game Changer" Award for her dedication to raising awareness of lymphedema.

Awards and Nominations: Bates won an Academy Award for Best Actress in a Leading Role for "Misery" in 1991, and she was also nominated for "Primary Colors," "About Schmidt," and "Richard Jewell." She has been nominated for eight Golden Globes, winning Best Performance by an Actress in a Motion Picture – Drama for "Misery" in 1991 and Best Performance by an Actress in a Supporting Role in a Series, Miniseries or Motion Picture Made for Television for "The Late Shift" in 1997. Kathy has earned 14 Primetime Emmy nominations, winning Outstanding Guest Actress in a Comedy Series for "Two and a Half Men" in 2012 and Outstanding Supporting Actress in a Miniseries or a Movie for "American Horror Story: Coven" in 2014.

Kathy won American Comedy Awards for "The Late Shift," "Primary Colors," and "Annie" and Blockbuster Entertainment Awards for "Titanic," "Primary Colors," and "The Waterboy." She has also received awards from the Broadcast Film Critics Association Awards, Gold Derby Awards, National Board of Review, Online Film & Television Association, Satellite Awards, and Screen Actors Guild Awards. She won a François Truffaut Award at the 2006 Giffoni Film Festival and a Lifetime Achievement Award at the 2011 Women Film Critics Circle Awards, and she received a star on the Hollywood Walk of Fame in 2016.

Real Estate: In 2001, Kathy paid $2.9 million for an 8-bedroom home in the Hancock Park area of Los Angeles. The home includes a library, theatre, swimming pool, spa, and 5-car garage. Bates previously lived in a Beachwood Canyon mansion that once belonged to "Dracula" star Bela Lugosi, and she sold it to actor Jon Cryer for $859,000 in 1999. 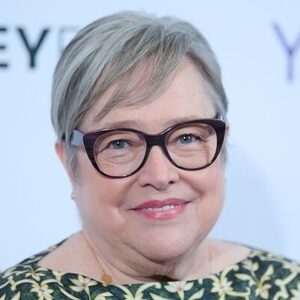