Kathleen Robertson net worth: Kathleen Robertson is a Canadian actress and producer who has a net worth of $3 million. Kathleen Robertson was born on July 8, 1973 in Hamilton, Ontario where she started taking acting classes when she was ten years old, and had roles in local theater productions. She is best known for her roles as Tina Edison in the Canadian sitcom "Maniac Mansion" from 1990 to 1993, and as Clare Arnold in the Fox popular teen drama series "Beverly Hills, 90210" from 1994 to 1997 during seasons four to seven.

She has appeared in the films "Nowhere", "Splendor", "Dog Park", "Beautiful", "Scary Movie 2", "XX/XY", "I am Sam", and "Hollywoodland" among others. She was one of the lead characters on the David E Kelley series "Girls Club. Robertson has had guest starring roles on "Law & Order: Criminal Intent", "CSI: Miami", "Medium", and "Rookie Blue". For two seasons she starred in the Starz series "Boss" alongside Kelsey Grammer". She played the wife of hockey legend Gordie Howe in "Mr. Hockey: The Gordie Howe Story" a made-for-television movie that appeared first on CBC in Canada and later on The Hallmark Channel in the US. In 2013, Robertson was cast as a lead in the Steven Bochco series "Murder in the First. She also appears in the second season of the A&E series "Bates Motel." 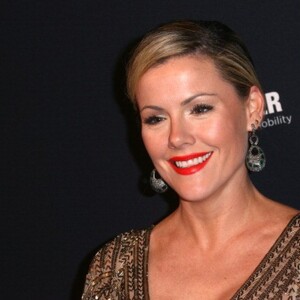