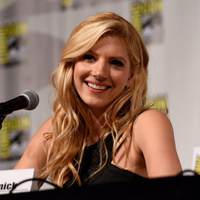 Katheryn Winnick net worth: Katheryn Winnick is a Canadian actress who has a net worth of $1 million dollars. Katheryn Winnick, also known as Katerena Anna Vinitska, was born in Etobicoke, Ontario, Canada, and grew up speaking Ukrainian. She began training in martial arts when she was seven, and subsequently learned to speak English. She went on to launch three of her own martial arts schools when she was in her early 20s. She began her professional acting career in the late 90s, and has gone on to appear in both film and television projects. She has appeared in guest-starring, co-starring, and starring roles on such television programs as "PSI Factors: Chronicles of the Paranormal", "Student Bodies", "Tracker", "Law & Order: Criminal Intent", "Oz", "CSI: NY", "House", "The Gates", "Bones", and "Nikita". She has appeared in such films as "Two Weeks Notice", "50 First Dates", "Failure to Launch", "Cold Souls", "Love & Other Drugs", and "The Art of the Steal". She is currently appearing on the series, "Vikings".