Her half-brother James Waterston is also an actor. Katherine graduated from the Tisch School of the Arts at NYU. She started out as a stage actor and has starred in Kindness, Bachelorette, The Cherry Orchard, and Dreams of Flying, Dreams of Falling. Her first screen role came in the 2004 TV movie Americana. Waterston has also starred in the movies Michael Clayton, The Babysitters, Good Dick, Taking Woodstock, Enter Nowhere, Robot & Frank, Being Flynn, The Letter, The Factory, Almost in Love, Night Moves, The Disappearance of Eleanor Rigby: Her, The Disappearance of Eleanor Rigby: Him, Glass Chin, You Must Be Joking, and Inherent Vice. She also had a recurring role as Emma Harrow in the TV series Boardwalk Empire in 2012. Waterston was nominated for a Satellite Award for Best Actress in a Supporting Role in 2014 for Inherent Vice. 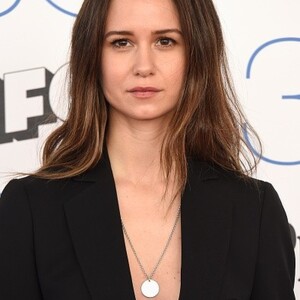