Katherine Ryan net worth: Katherine Ryan is a Canadian comedian, writer, presenter, and actress who has a net worth of $4 million. Katherine Ryan was born in Sarnia, Ontario, Canada in June 1983. As an actress she starred as George Bryan on the television series Campus in 2011. Ryan provided voicework for the TV series Counterfeit Cat in 2016.

In 2017 she narrated the series Beyond Bionic. She had a recurring role as Lucy on the television series Badults in 2014. Katherine Ryan has appeared on several other TV series including Video on Trial, The Apprentice: You're Fired!, Sweat the Small Stuff, Hair, Mock the Week, Bring the Noise, Safeword, 8 Out of 10 Cats, Taskmaster, Frankie Boyle's New World Order, 8 Out of 10 Cats Does Countdown, Roast Battle, The Fix, The Last Leg, and more. Ryan appeared on BBC's Live at the Apollo and won the Nivea Funny Women Award. In 2017 her special Katherine Ryan: In Trouble was released on Netflix. 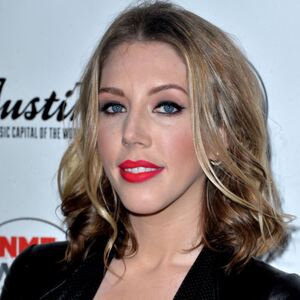