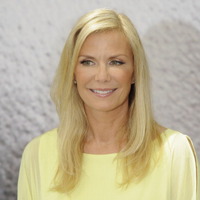 Katherine Kelly Lang Net Worth and salary: Katherine Kelly Lang is an American actress who has a net worth of $12 million. Born Katherine Kelly Wegeman on July 25, 1961, in Hollywood California, she is best known for her role as Brooke Logan on The Bold and the Beautiful, a role she has held since 1987. The daughter of Olympic ski-jumper Keith Wegeman and actress Judith Lang, she followed in her mother's footsteps embarking on an acting career. A graduate from Beverly Hills High School, Kelly was eighteen years old when she made her screen debut in 1979, playing a supporting role in the comedy Skatetown, USA. Her subsequent roles were mostly guest stints in TV series like The Powers of Matthew Star, Dreams, Legmen, Riptide, The Fall Guy and Happy Days. Meanwhile, she got a recurring part on the HBO's comedy series 1st & Ten, which was followed by her most prominent turn to date on the daytime soap The Bold and the Beautiful in 1987. Ever since she has played the role of Brooke Logan, a designer at Forrester Creations, and at some points was the wife of Ridge Forrester (Ronn Moss). One of the soap's original cast members, she portrayed a character that has gone through numerous marriages and rivalries just as she did in her real life. While entangled in a love triangle on screen, she became a mother of three and has gone through two marriages and divorces in reality. Apart from being part of the cast of The Bold and the Beautiful, Lang has also made guest appearances on Magnum P.I. and Lonesome Dove: The Outlaw Years, as well as she appeared in such feature movies as The Night Stalker, Made in USA and Till the End of the Night. Over the years, the Brooke Logan part has given her seven Soap Opera Digest Awards and a Daytime Emmy nomination for a special fan award.