Katherine Helmond Net Worth: Katherine Helmond was an American actress who had a net worth of $5 million at the time of her death in 2019. Born in 1929 in Galveston, Texas, Katherine Helmond's show business career began on stage in New York and she made her on-screen debut in a 1962 episode of "Car 54, Where Are You?".

She didn't return to the screen for nearly a decade until her film debut in 1971's "Believe in Me". Helmond's star began to rise throughout the '70s as she landed parts in "The Legend of Lizzie Borden", "Spencer's Pilots", "Soap", "Family Plot", "The Hindenburg", and "The Rookies". Her first major TV role came as Jessica Tate on "Soap" from 1977 until 1981, and she earned four straight Emmy nominations for Best Actress in a Comedy Series. Three years later, Helmond scored the part of Mona Robinson on the hit series "Who's the Boss? alongside Tony Danza. She appeared on the show for eight seasons, winning a Golden Globe Award for Best Supporting Actress in 1989; Helmond earned two Emmy nods for her part in the late '80s. She went on to appear as Doris Sherman in "Coach" and Lois Whelan in "Everybody Loves Raymond", receiving another Emmy nomination. Helmond's other TV and film credits include "Fear and Loathing in Las Vegas", "Cars", "Cars 2", "The Lorax", "The Love Boat", "Melissa & Joey", "True Blood", and "The Glades". She married her husband, George N. Martin, in 1957, though that union ended in divorce. Helmond married her second husband David Christian in 1962. Katherine Helmond died on February 23, 2019 at the age of 89. 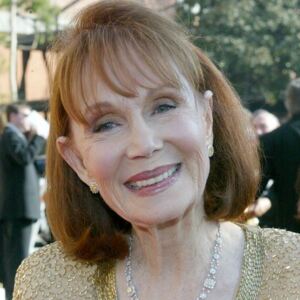