Katharine Hepburn net worth: Katharine Hepburn was an American actress who had a net worth equal to $30 million at the time of her death (after adjusting for inflation). Soon after her death, Hepburn's lawyer estimated that her estate was worth $20 million. The majority of that value came from her 7.17 acre waterfront Connecticut estate.

Years later, a portion of this estate was sold for $28 million. Katharine Hepburn was born in Hartford, Connecticut in May 1907 and passed away in June 2003. She was a leading lady in Hollywood for over 60 years and appeared in many genres. She was named as the greatest female star of Classic Hollywood Cinema by the American Film Institute. Hepburn first starred on Broadway before acting on film. She starred in several films including Morning Glory, Little Women, Alice Adams, Stage Door, Bringing Up Baby, Holiday, The Philadelphia Story, Woman of the Year, Adam's Rib, The African Queen, Pat and Mike, Summertime, Desk Set, Suddenly, Last Summer, Long Day's Journey into Night, Guess Who's Coming to Dinner, The Lion in Winter, Love Among the Ruins, Rooster Cogburn, and On Golden Pond. Hepburn won a record four Academy Awards, all for Best Actress in a Leading Role. She won several other awards and received a star on the Hollywood Walk of Fame at 6284 Hollywood Blvd. in 1960. She was in a relationship with actor Spencer Tracy from 1941 to 1967. Katharine Hepburn passed away on June 29, 2003 at 96 years old. 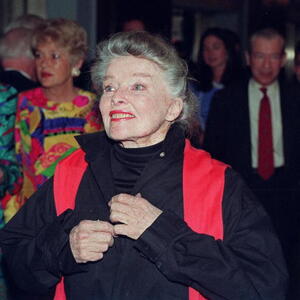