Kate Micucci Net Worth: Kate Micucci is an American actress, comedian, and musician who has a net worth of $500 thousand. Kate Micucci was born in March of 1980 and is best known for her work on sitcoms, in which she plays quirky, often musically-talented characters. Her most notable appearances have been as Stephanie "Gooch" Gooch on Scrubs, Shelley on Raising Hope – both of whom sang and played the ukulele, and Lucy, one of the main character's girlfriends on The Big Bang Theory.

She is also in the comedy and musical pair, Garfunkel and Oates. Miccuci is of Italian ancestry and hails from New Jersey, but was raised in Pennsylvania. Growing up, she played many instruments, including classical piano, which was taught to her by her mother. Miccuci graduated from Keystone College with a bachelor's degree in studio art in 2003. She began appearing in television shows in 2006, where she appeared as extras and in minor roles for various shows. She then began taking on larger opportunities, including those which included her singing and musical talents. She has also lent her voice to various roles, including that of Sadie in Steven Universe and Irma Langinstein in the TV series version of Teenage Mutant Ninja Turtles. 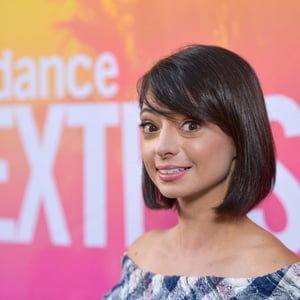