Karley Scott Collins Net Worth: Karley Scott Collins is an American actress who has a net worth of $400 thousand. Karley Scott Collins was born in 1999 in Florida, and she made her on-screen debut in 2006 as Oprah Pearl in six episodes of "The Class". She has since gone on to appear as Erin in "Private Practice", as Katie Graber in "Amish Grace", as Young Olivia Dunham in "Fringe", and as Gretel and Ava Zimmer in ABC's "Once Upon a Time". Collins also works as a voice actress, lending her pipes to several episodes of the animated series "Family Guy". She made her feature film debut in 2008's "The Hottie and the Nottie" and has since appeared in "Pulse 2: Afterlife", "Amusement", "Pulse 3: Invasion", "Open Season 3", "Answers to Nothing", "When You Find Me", "Letters to God", and "The Collector". In "The Hottie and the Nottie", Collins portrayed the younger version of Hollywood socialite Paris Hilton's character. Collins has also appeared in a handful of TV commercials, including an advertisement for Highmark Insurance. The teenager is particularly interested in fairies. When she isn't acting, she enjoys staying active and playing a variety of sports such as tennis, swimming, cycling, scuba diving, and gymnastics. 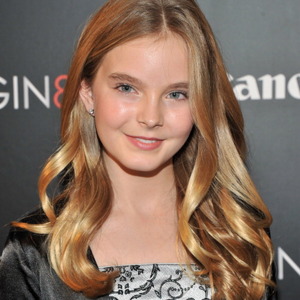