Karla Martínez Net Worth: Karla Martínez is a Mexican TV personality and host who has a net worth of $10 million. Born in 1976 in Chihuahua, Chihuahua, Mexico, Karla Martínez studied at the University of Texas at El Paso. She earned her bachelor's degree in electronic media and went to work in the same market in 1995 shortly after graduation. Martínez worked for KINT-TV, the El Paso, Texas affiliate station for Univision. After her stint with KINT-TV, worked as a correspondent for Univision's "Noticiero Univision" and for "Primer Impacto". In addition, she served as a reporter for the network's entertainment news show called "El Gordo y La Flaca". Martínez began hosting the popular TV program "Control" in 2000 after moving to Miami, Florida. She took over for Lesley Ann Machado and stayed on the show for six years; it is the role for which Martínez is best known today. After leaving "Control", Martínez landed a gig as co-host of the top-rated morning show "Despierta America". She is frequently chosen to host Univision Network specials, including the company's coverage of The Royal Wedding. Martínez landed on the "People" magazine's Spanish edition's list of the 25 most beautiful people. She is the author of a book, "The Power of a Smile", and lives in Miami with her husband and their children. 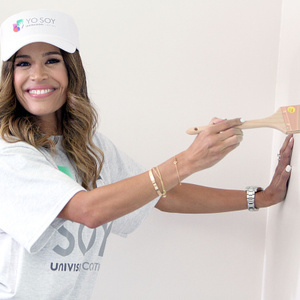