What Is Karen Gillan's Net Worth?

Karen Gillan was born Karen Sheila Gillan on November 28, 1987, in Inverness, Scotland. Her mother, Marie, is of Scottish descent, and her father, Raymond, is from North East England. Karen's family is Catholic, but she told "The Herald" in 2013, "I haven't been christened and I don't practise any religion." When Gillan was 16 years old, she moved to Edinburgh, where she took an HNC (Higher National Certificate) Acting and Performance course at Telford College. At age 18, she attended the Italia Conti Academy of Theatre Arts in London, where she was discovered by a modeling agency. Karen made her modeling debut in 2007 at London Fashion Week.

Gillan's television career began in a 2006 episode of the ITV series "Rebus," and in 2008, she guest-starred on "Harley Street" and "Coming Up" and appeared in the TV movie "Stacked" and the film "New Town Killers." From 2008 to 2009, she was a cast member on the Channel 4 sketch comedy series "The Kevin Bishop Show," and in 2009, she had a lead role in the BBC Two horror series "The Well." In 2010, Karen appeared in the film "Outcast" and joined the cast of "Doctor Who" as Amy Pond, the companion to Matt Smith's Eleventh Doctor. Gillan appeared in 36 episodes of the series and earned several awards for her performance. In 2013, she starred on the Adult Swim comedy "NTSF:SD:SUV::" and played the lead roles of Kaylie Russell in "Oculus" and Jane Lockhart in "Not Another Happy Ending." In 2014, Karen co-starred with Chris Pratt, Zoe Saldaña, Dave Bautista, Vin Diesel, and Bradley Cooper in Marvel's "Guardians of the Galaxy," which grossed $772.8 million at the box office. She shaved her head to play Nebula, and she reprised the role in the blockbusters "Guardians of the Galaxy Vol. 2" ($863.8 million), "Avengers: Infinity War" ($2.048 billion), and "Avengers: Endgame" ($2.798 billion). In 2014, she also played the lead role, Eliza Dooley, on the ABC sitcom "Selfie." 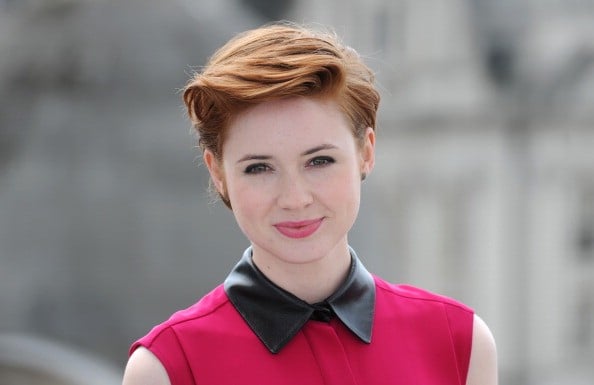 In 2015, Gillan appeared in the Academy Award-nominated film "The Big Short" alongside Christian Bale, Steve Carell, Ryan Gosling, and Brad Pitt as well as the HBO tennis mockumentary "7 Days in Hell." She co-starred with Dwayne Johnson, Jack Black, Kevin Hart, and Nick Jonas in 2017's "Jumanji: Welcome to the Jungle" and 2019's "Jumanji: The Next Level," which brought in $962.5 million and $800.1 million at the box office, respectively. Around this time, Karen also appeared in the films "In a Valley of Violence" (2016), "The Circle" (2017), "Alex & the List" (2017), "All Creatures Here Below" (2018), and "Stuber" (2019). She played Mercedes in the 2020 film adaptation of "The Call of the Wild" alongside Harrison Ford, and in 2021, she starred as a hitwoman in the Netflix action thriller "Gunpowder Milkshake." In 2022, she appeared in the science-fiction thriller "Dual" and the Netflix comedy "The Bubble" and filmed "Guardians of the Galaxy Vol. 3" and "The Guardians of the Galaxy Holiday Special."

Karen married actor/comedian/writer Nick Kocher in May 2022 at Scotland's Castle Toward. Kocher has appeared in more than 30 film and television projects, and he earned a Primetime Emmy nomination as a member of the "Saturday Night Live" writing staff. In 2011, Gillan took part in Fashion Targets Breast Cancer, and she said of the charity campaign, "Fashion Targets Breast Cancer is about so much more than the clothes you wear. Fashion is giving you the power to make a difference to the lives of 48,000 women diagnosed with breast cancer each year." In 2018, she screened her film "The Party's Just Beginning," which is about a woman trying to cope with the suicide of her best friend, in Inverness and visited the Mikeysline crisis support centre. She pledged her support to the mental health organization and raised awareness about Mikeysline on numerous occasions. In 2020, Pablo Lopez, the owner of the Fashion Week Online website, was inspired by "The Party's Just Beginning" and launched a contest in conjunction with Mikeysline to find two non-professional fashion designers to showcase at New York Fashion Week. The competition's purpose was to raise awareness of World Suicide Prevention Day and raise money for Mikeysline, and entries had to "reflect the theme of suicide prevention, mood, happiness, depression, or hope."

Gillan won awards from "Cosmopolitan's" Ultimate Women of the Year Awards (2010), the Young Scot Awards (2010), SFX Awards (2011), TV Quick Awards (2011), and National Television Awards (2012) for "Doctor Who," and she earned nominations from the Constellation Awards and Scream Awards. For "Guardians of the Galaxy," she received an Empire Award for Best Female Newcomer in 2015, and she shared Best Ensemble awards from the Detroit Film Critics Society Awards and Nevada Film Critics Society with her castmates. For the 2014 short film "Bound for Greatness," Karen won awards at the International Filmmaker Festival of World Cinema, FirstGlance Film Festival, and IFS Film Festival, and she was named Best Actress for "All Creatures Here Below" at the 2018 Downtown Film Festival Los Angeles. In 2012, she was named Scotland's Fashion Icon at the Scottish Fashion Awards.