What is Justin Theroux's Net Worth?

Justin Theroux was born Justin Paul Theroux on August 10, 1971, in Washington, D.C. His father, Eugene, worked as a lawyer at Baker & McKenzie, and his mother, Phyllis, is an author, journalist, and essayist. Justin has two siblings, Elizabeth and Sebastian, and talent runs in the Theroux family; uncles Paul, Alexander, Peter, and Joseph are all writers, and his cousins, Marcel and Louis Theroux, are documentary filmmakers and journalists. Theroux began acting at Massachusetts' Buxton School, and he earned a B.A. in visual arts and drama from Vermont's Bennington College in 1993.

In 1995, Justin made his television debut on an episode of "C.P.W.," and the following year, he appeared in his first film, "I Shot Andy Warhol." In 1997, he played Clarence the Cowboy in "Romy and Michele's High School Reunion," co-starred with Alyssa Milano in "Below Utopia," and appeared in the straight-to-video film "Dream House." Theroux had a busy year in 1998, appearing in the movies "Frogs for Snakes" and "Dead Broke" and guest-starring on "New York Undercover," "Ally McBeal," "Spin City," and "Sex and the City." He landed a steady gig in 2000, playing Nick Pierce on 27 episodes on CBS police procedural "The District." That year, Justin also appeared in "American Psycho" and "The Broken Hearts Club: A Romantic Comedy," and he followed those films with three movies in 2001: "The Sleepy Time Gal," "Mulholland Drive," and Ben Stiller's "Zoolander." He teamed up with Stiller again for 2003's "Duplex," 2008's "Tropic Thunder," and 2016's "Zoolander," and he co-wrote the "Tropic Thunder" and "Zoolander 2" scripts with Ben.

In 2003, Theroux appeared in the films "Charlie's Angels: Full Throttle," "Duplex," and "Happy Ending," guest-starred on two episodes of "Alias," and began an 8-episode stint on HBO's critically-acclaimed "Six Feet Under," playing the love interest of Rachel Griffiths' Brenda Chenowith. "Six Feet Under" earned Justin a 2005 Screen Actors Guild Award nomination in the Outstanding Performance by an Ensemble in a Drama Series category. In 2005, Theroux appeared in "Strangers with Candy," a prequel to the Comedy Central series starring Amy Sedaris, Stephen Colbert, and Paul Dinello. The following year, Justin made his directorial debut with the film "Dedication" (which he also produced), and it premiered at the Sundance Film Festival in 2007. He appeared in "Miami Vice" and "Inland Empire" in 2006, and he played Jesus Christ in David Wain's comedy anthology "The Ten" in 2007. Theroux returned to television in 2008, portraying John Hancock in HBO's award-winning miniseries "John Adams," and two years later, he guest-starred on four episodes of NBC's "Parks and Recreation" as lawyer Justin Anderson, a love interest of Amy Poehler's Leslie Knope.

Justin wrote the screenplay for 2010's "Iron Man 2," which grossed a massive $623.9 million at the box office; that year, he also acted as a creative consultant on animated feature "Megamind" and voiced Megamind's Father. He showed his villainous side as evil wizard Leezar in 2011's "Your Highness" and reunited with director David Wain for 2012's "Wanderlust." In 2013, Theroux landed the lead role on HBO's "The Leftovers," a supernatural mystery series based on a novel by Tom Perrotta. The show ran from 2014 to 2017, airing 28 episodes and earning more than two dozen award nominations. While starring on "The Leftovers," Justin appeared in "The Girl on the Train" (2016), which grossed $173.2 million at the box office, reprised the role of Evil DJ in "Zoolander 2," had a cameo in "Star Wars: The Last Jedi" (2017), and voiced Lord Garmadon in "The Lego Ninjago Movie." In 2018, Theroux played a neurochemist on Netflix's "Maniac," appeared in the films "Mute," "The Spy Who Dumped Me," and "On the Basis of Sex," and voiced Dropkick in "Bumblebee," which was a huge hit, bringing in $468 million worldwide. In 2019, he lent his voice to Disney's "Lady and the Tramp" remake and served as an executive producer on ABC's "Live in Front of a Studio Audience." 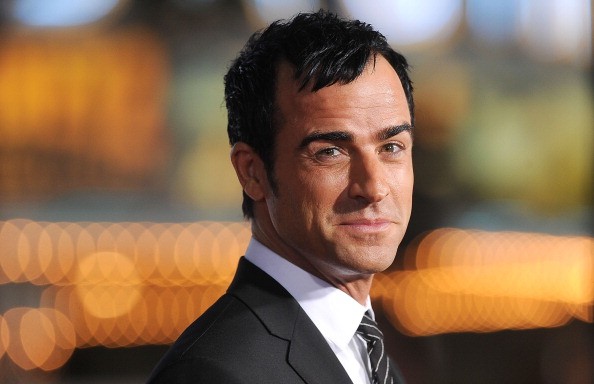 Justin began dating stylist Heidi Bivens in his mid-twenties and stayed with her for 14 years. After the relationship ended in 2011, he began dating his "Wanderlust" co-star Jennifer Aniston, and the two were engaged in August 2012. Justin and Jennifer married in a surprise ceremony at their home on August 5, 2015; guests were told that they were invited to a party for Theroux's 40th birthday. The couple spent their honeymoon in Bora Bora, and Justin nearly drowned while scuba diving due to low levels in his oxygen tank. Theroux and Aniston announced their separation in February 2018.

In 2017, Justin won an Online Film & Television Association Award for Best Actor in a Drama Series for his performance in "The Leftovers," and he received a Primetime Emmy for Outstanding Variety Special (Live) for "Live in Front of a Studio Audience" in 2019, sharing the honor with fellow executive producers Norman Lear, Jimmy Kimmel, Adam McKay, Will Ferrell, Brent Miller, and Eric Cook. "The Leftovers" also earned Theroux nominations from the Critics Choice Television Awards (2016), the Dorian Awards (2016), and the IGN Summer Movie Awards (2017) as well as three Gold Derby Award nominations: Drama Lead Actor in 2016 and 2017 and Drama Actor of the Decade in 2019.

In 2011, Justin and Jennifer purchased an 8,500 square foot Bel Air mansion for $21 million and renovated it together, a process that was completed in 2013. The former couple held their secret wedding ceremony in the backyard, and Aniston held on to the property after the split. Theroux owns an apartment in Greenwich Village and has reportedly spent around $1 million on renovations and expansions, leading to a dispute with one of his neighbors that has been going on since 2017.