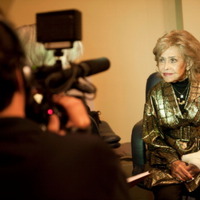 June Foray Net Worth: June Foray is an American voice actress who has a net worth of $10 million. June Foray was born September 18, 1917 in Springfield, Massachusetts. She began work as a radio actress at a young age. As an adult, she branched out into animated films and television shows, providing the voices for characters such as Rocky the Squirrel and Witch Hazel. Her work appears in many classic Disney, Looney Tunes and Hanna-Barbera productions. In the 1940s, Foray began working in films, primarily voicing animated characters. She played Lucifer the Cat in the Walt Disney Film Cinderella and a mermaid in Peter Pan. She also contributed to Woody Woodpecker cartoons and played the role of Granny in the Tweety and Sylvester series. Foray also worked on a number of other Hanna-Barbera shows, including The Flintstones, Tom and Jerry and The Jetsons. She played Rocky and Natasha, two of the leading roles, on The Rocky and Bullwinkle Show. Other notable parts include Mother Nature on The Smurfs and Cindy Lou Who in the Christmas classic How the Grinch Stole Christmas. Foray also provided the voice of the original "Chatty Cathy" doll. June Foray continues to occasionally contribute to voice roles. In 2012, Foray received her first Emmy nomination, and won in the category of Outstanding Performer in an Animated Program for her role as Mrs. Cauldron on The Garfield Show and thus became, at age 94, the oldest entertainer to be nominated for and to win an Emmy Award. In September 2013, she was honored with the Governors Award at the 65th Primetime Creative Arts Emmy Awards.