Juliette Lewis Net Worth: Juliette Lewis is an American actress and singer who has a net worth of $10 million. She is best known for playing off-beat characters in films and televisions shows including "Natural Born Killers," Starsky and Hutch," "Wayward Pines," "Old School," and "Hysterical Blindness."

Early Life: Juliette Lake Lewis was born on June 21st, 1973 in Los Angeles, California. Her father was actor Geoffrey Lewis, and her mother worked as a graphic designer. She has eight siblings including children from her father's other marriage. Her parents divorced when she was just two years old, but she was able to spend her childhood with both parents since they remained in Los Angeles. Her first acting role was in 1980 with an uncredited role in the film "Bronco Billy," which starred her father as well as Clint Eastwood.

Early Career: Lewis' first credited appearance on film was in the 1987 television movie "Home Fires," and in the same year, she was cast in the television show "I Married Dora," which ran for one season. The following year she was featured in a couple episodes of television show "Facts of Life" and in the film "My Stepmother Is an Alien," which starred Dan Ackroyd and Kim Bassinger. In 1989, she was in the science fiction comedy "Meet the Hollowheads," the comedy "The Running Kind," the Christmas-themed comedy "National Lampoon's Christmas Vacation," and she made guest appearances on the show "The Wonder Years." She starred alongside Brad Pitt in the 1990 television movie "Too Young to Die?," which was loosely based on the case of Attina Marie Cannaday who murdered and kidnapped a US Air Force Sergeant. She was sixteen at the time of filming and had recently been arrested for underage drinking in a bar.

Breakout: Lewis first garnered widespread attention for her part in the 1991 Martin Scorsese remake of the film "Cape Fear." She played the role of the daughter in a family targeted by a psychopathic criminal and received widespread praise for her performance. She earned a Golden Globe Award nomination in addition to an Academy Award nomination for Best Supporting Actress. The next year she had a supporting role in the Woody Allen film "Husbands and Wives" and in the film "That Night," which was Katherine Heigl's theatrical debut. She saw three releases in 1993. She starred alongside Brad Pitt and David Duchovny in the thriller "Kalifornia" and in the crime thriller "Romeo is Bleeding." She finished the year with a supporting role opposite Leonardo DiCaprio in the critically acclaimed drama "What's Eating Gilbert Grape?." In 1994, she appeared alongside Woody Harrelson in the Oliver Stone thriller "Natural Born Killers," and she and Harrelson were nominated for two MTV Movie Awards for Best On-Screen Duo and Best Kiss. In 1995, she reunited with DiCaprio for the drama "Basketball Diaries," and she starred in the Kathryn Bigelow film "Strange Days." The following year she appeared alongside George Clooney in the Robert Rodriguez directed film "From Dusk Til Dawn." She ended the decade with roles in the 1998 comedy "Some Girl," and the 1999 films "The Other Sister" and "The 4th Floor."

In 2001, she appeared in the thriller "The Way of the Gun," and the following year, she starred in the crime film "Picture Claire" and the independent lesbian themed film "Gaudi Afternoon." In the early 2000s, she had guest roles on a television shows including "Dharma and Greg," "Free for All," "My Name Is Earl," "Pancake Mountain," and "Memphis Beat." She received both an Emmy Award and an Independent Spirit Award nomination in 2003 for her role in the television movie "Hysterical Blindness," which also featured Uma Thurman. She also had roles in the 2004 comedy "Starsky And Hutch," the 2005 comedy "Daltry Calhoun," the 2006 independent comedy "The Darwin Awards."

In addition to adding to her resume as a comedy actress in the 2000s, Lewis also made her debut as a singer and started the band Juliette and the Licks. The group released their first album "You're Speaking My Language" in May of 2005, and it was met with favorable reviews. They followed its release with an international tour, and in 2007, they released their second and final album "Four on the Floor." Lewis continued to pursue a career in music and released her first solo album "Terra Incognita" in 2009. It received mixed reviews among critics.

2010s Career: In 2010, she appeared in Mark Ruffalo's directorial debut "Sympathy for Delicious" as well as in the Zac Galifianakis led comedy "Due Date." The following year she starred alongside Chloë Grace Moretz in the independent drama "Hick," which received negative reviews among critics. In 2012, she starred with Josh Lucas in the television show "The Firm," which ran for one season on NBC. The following year she appeared with Meryl Strep and Julia Roberts in the comedy-drama film "August: Osage County." Both Strep and Roberts were nominated for Academy Awards and Golden Globes, and the film was a success commercially, grossing over $74 million worldwide. In 2015, she had a recurring role on the science fiction television series "Wayward Pines," and she began her role as Detective Andrea Collins on the television series "Secrets and Lies," which lasted for all twenty-two episodes of its first season. In 2017, she made a guest appearance on the show "The Graves," and the following year she saw the release of three major drama film releases with "Back Roads," "A Million Little Pieces," and "Anthem of a Teenage Prophet."

Real Estate: In January 2019 Juliette paid $1.5 million for a home in the Hollywood Hills. 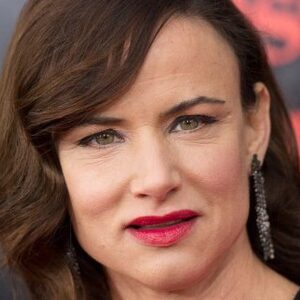