Julie White Net Worth: Julie White is an American actress who has a net worth of $3 million. Julie White was born June 4, 1961 in San Diego, California. As a child, she appeared regularly in local plays, and became somewhat of a regular on the scene by the time she was 16.

When she appeared in a local production of the musical The Baker's Wife, she was encouraged to pursue a career in New York City. She subsequently moved to New York City and studied history at Fordham University. Primarily known as a stage actress, White started her professional career in regional theater. After appearing in productions of Absurd Person Singular, Marvin's Room, Largo Desolato and On the Verge, she made her off-Broadway debut with a role in Lucky Stiff. She later moved on to Broadway, beginning with The Heidi Chronicles in 2006. She soon appeared in the Broadway run of The Little Dog Laughed, her performance applauded by critics. She won the Tony for Best Performance by a Leading Actress in a Play in 2007. Her television career gained recognition in 1993 as a cast member of the comedy series Grace Under Fire. The series debuted as the highest-rated new comedy of the season, but fell prey to behind-the-scenes conflicts amongst the production staff. Following recurring roles in Six Feet Under and Law & Order: Special Victims Unit, she took her next regular role in the comedy series Cavemen. Her role as Leslie McKinney, the mother of Kate (Kaitlyn Doubleday), was short-lived, however, as the writers' strike put the show on hiatus; it was subsequently canceled before the conflict was resolved. White also appeared in several films, including Flypaper, Say It Isn't So, Sunday on the Rocks, War of the Worlds, and Transformers. In 2008, she was cast in the follow-up to the blockbuster action hit called Transformers: Revenge of the Fallen.

In 2012, Julie White joined the cast of the NBC comedy series Go On, starring Matthew Perry (of the long-running sitcom Friends). 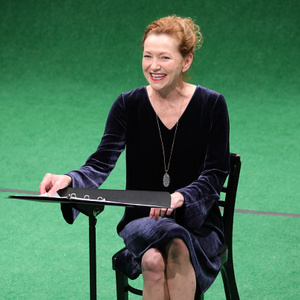