Julie Delpy Net Worth: Julie Delpy is a French-American actress who has a net worth of $10 million dollars. Julie Delpy was born in 1969 in Paris, France, to parents heavily involved in the entertainment industry. Her mother worked as an actress, while her father directed stage productions. When she was 14 years old, Delpy landed her first on-screen part in 1985's "Detective".

Two years later, her performance in "La Passion Beatrice" earned her a Most Promising Actress nomination at the Cesar Awards. Soon after, Delpy traveled to New York where she earned a part in 1990's hit "Europa, Europa", 1991's "The Voyager", and 1993's "The Three Musketeers". Delpy starred in "Before Sunrise" alongside Ethan Hawke and because of her success in the film, she was cast in "An American Werewolf in Paris" in 1997. Delpy's interest in show business went beyond acting and she studied directing one summer at New York University. Her short film, "Blah Blah Blah", was shown at Sundance. Delpy later helped write the sequel to "Before Sunset" and was nominated for an Academy Award for Best Adapted Screenplay for "Before Sunrise". Her first feature film, "Looking for Jimmy", debuted in 2002 and she later wrote, directed, and co-produced "2 Days in Paris", which cast her parents. She starred with Chris Rock in the movie's follow-up, "2 Days in New York". Delpy earned a second Best Adapted Screenplay nod at the Oscars for "Before Midnight", the sequel to "Before Sunrise". Her self-titled debut album released in 2003. She became a United States citizen in 2001 and holds dual citizenship with France. She and her partner, Marc Streitenfeld, welcomed their first child in 2009. 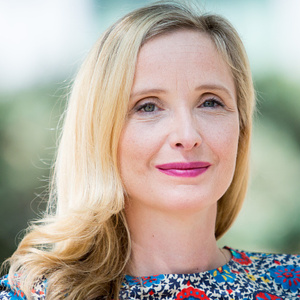