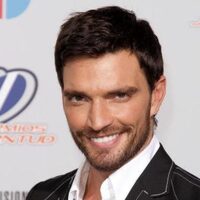 Julián Gil Net Worth: Julián Gil is an Argentine-born Mexican actor, model and entertainer who has a net worth of $4 million. Julián Gil was born June 13, 1970 in Buenos Aires, Argentina. He has starred in many telenovelas including Valeria, Amor Comprado, Acorralada, Sortilegio and Eva Luna. Gil began his acting career in theater with the play By the Middle if There is No Remedy in 1995 in Puerto Rico, followed by such other works as The Crime of Father Amaro, Sex, Shame and Tears and Nine ½ Weeks, among others. He was then cast in several telenovelas such as Tres Amigas Puerto Rico, Mi conciencia y yo Ecuador, Decisiones, Miami, Por todo lo alto, RCTV en Venezuela and in the films La caja de sorpresas, El milagro de Coromoto, Más allá del límite, Fuego en el alma and Marina. In 2010, Gil landed a role in the telenovela Valientes, where he was cast as protagonist Leo Soto. In 2011, he played telenovela Jose Alberto Castro La que no podía amar. In 2012 Gil played a protagonist in Laura Carmine in ¿Quién eres tú?, a remake of Mexican telenovela La Usurpadora. In 2014, he appeared in telenovela Nicandro Diaz Gonzalez Hasta el fin del mundo. Gil was formerly married to Brenda Torres. He has two children, daughter Nicolle (born 1987) and son Julián, Jr. (born 1995). In 2006, he was reportedly in a short-lived relationship with Maritza Bustamante. In 2010, he was romantically linked to his co-star in Eva Luna, Sofía Lama. In April 2011, it was confirmed that he and actress Marjorie de Sousa were dating, but ended their relationship a couple of months later. At latest count, Julián is dating Viviana Serna, an actress who played his daughter in the telenovela ¿Quién eres tu?