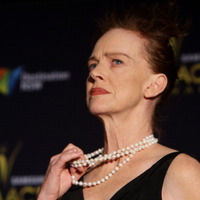 Judy Davis Net Worth: Judy Davis is an Australian actress who has a net worth of $5 million dollars. Born in Perth, Western Australia, in 1955, Judy Davis studied at the Western Australian Institute of Technology and later the National Institute of Dramatic Art. She made her film debut as Lynn in 1977's "High Rolling" before scoring the part that would catapult her to recognition. Davis won a BAFTA Best Actress Award and BAFTA Best Newcomer Award for her portrayal of Sybylla Melvyn in 1979's "My Brilliant Career". She was also nominated for an Australian Film Institute Award for Best Actress in a Leading Role for the part. Since then, she went on to appear in "Winter of Our Dreams", "Heatwave", "A Woman Called Golda", and "Who Dares Wins" before earning an Academy Award nomination for Best Actress for 1984's "A Passage to India". Davis has been nominated for close to a dozen Emmy Awards for her TV work. She has appeared on "One Against the Wind", "Serving in Silence: The Margarethe Cammermeyer Story", "The Echo of Thunder", "Dash and Lilly", "A Cooler Climate", "Life with Judy Garland: Me and My Shadows", "The Reagans", "A Little Thing Called Murder", "The Starter Wife", "Diamonds", and "Page Eight". Davis has also appeared in several stage productions, including 1980's "Piaf", 1986's "Hedda Gabler", and 2004's "Victory". Davis has been married to her husband, actor Colin Friels, since 1984. They have two children together.