Judy Carne Net Worth: Judy Carne was an English actress who had a net worth of $8 million dollars. Judy Carne was born Joyce Botterill in Northampton, Northamptonshire, England, in 1939. She acted in 1961's "Danger Man" series in Britain before moving to the United States. She scored a part on TV series "Fair Exchange" as an English girl who moves to America.

Her other credits include appearances in "The Baileys of Balboa", "The Man from U.N.C.L.E.", "Gidget", "Love on a Rooftop", "I Dream of Jeannie", "The Big Valley", "Bonanza", "All the Right Noises", "12 O'Clock High", and "The Americanization of Emily". Her most famous role, however, was on "Rowan & Martin's Laugh-In" from 1968 until 1973. She became famous for the phrase "Sock it to me!", which always ended with Carne experiencing some sort of calamity whenever she said it. She wrote and published her autobiography, "Laughing on the Outside, Crying on the Inside: The Bittersweet Saga of the Sock-It-To-Me Girl", in 1985. It touched on her marriage, her drug use, and her sexuality. Carne married actor Burt Reynolds in 1963. They divorced in 1965 and she wed producer Robert Bergmann five years later. That marriage ended one year later. Carne ended her acting career in the early '90s. Unfortunately Judy Carne died on September 3, 2015. 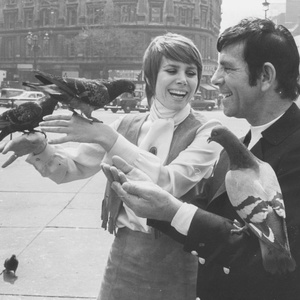