How much is Judi Dench Worth?

Judi Dench net worth and salary: Dame Judi Dench is an English film, stage and television actress who has a net worth of $45 million. She is one of the most successful and established British theater performers and has gone on to also have a lengthy film career as well.

Early Life and Career: Judi Dench was born on December 9, 1934 in Heworth, York, UK, to her Irish mother Eleanora Olive and her English father Reginald Dench. Judi is a follower of the Quaker religion and attended a Quaker secondary school growing up. Her parents were actively involved in the York theater scene. Her mother even helped out with wardrobes. Actors would frequently stay at the Dench house while they were in town performing a play. Pretty soon Judi herself was actively involved in her local theater. She attended the Central School of Speech and Drama, based at the Royal Albert Hall, London. She made her first stage appearance in September 1957 with the Old Vic company at the Royal Court Theater in Liverpool. She played Ophelia in "Hamlet." She made her London debut in the same production at the Old Vic in the West End. She joined the Royal Shakespeare Company in December 1961 and by 1964 was appearing in TV and films such as "A Study in Terror" and "Talking to a Stranger," the latter of which won her a BAFTA for Best Actress.

In 1968, Dench was given the role of Sally Bowles in the musician "Cabaret." After a long run in "Cabaret," Dench made numerous appearances with the Royal Shakespeare Company in Stratford and London for nearly twenty years, winning several "best actress" awards. Among her many roles included the Duchess in "The Duchess of Malfi" in 1971. She also appeared in "Much Ado About Nothing" and starred as Lady Macbeth in 1976's acclaimed production of "Macbeth." In 1979, Dench was nominated for a BAFTA for her role as Hazel Wiles in the BBC drama "On Giant's Shoulders."

Mainstream Success:  She is famous for playing the role of "M" in several James Bond films including "GoldenEye," "Skyfall", "The World is Not Enough," "Tomorrow Never Dies," "Casino Royale" and "Die Another Day." Dench was the first woman to portray M, succeeding Robert Brown. In 1998, Dench teamed up with director John Madden to play Queen Elizabeth I in "Shakespeare in Love." She was nominated for most of the high profile awards for her performance and won both the Academy Award and the BAFTA Award for Best Actress in a Supporting Role. That same year, she won a Tony Award for her Broadway performance in "Amy's View."

In 2001, Dench's husband Michael Williams died tragically of lung cancer. She went to Nova Scotia almost immediately after his funeral to start production on the drama film "The Shipping News." She also finished up work on the film "Iris," co-starring Kate Winslet. They were each nominated for an Oscar, Dench's fourth nomination in five years. In 2002, she appeared in "The Importance of Being Earnest." A major hit for her came with 2005's "Pride & Prejudice." She had only one week available to shoot her scenes. The film was a critical and commercial success with a worldwide gross of over $121 million USD and several Oscar and Golden Globe nominations. In 2006, Dench appeared opposite Cate Blanchett as a London teacher with a fondness for vulnerable women in "Notes on a Scandal." The film received positive reviews and commercial success, out-earning its budget by several millions of dollars. Her next film was "Nine," and, despite opening to negative reviews, the film was nominated for four Academy Awards. Dench then returned to the small stage for a number of productions and years.

In 2011, Dench starred in "Jane Eyre," "My Week with Marilyn," and "J. Edgar." She then reunited with John Madden on the set of the comedy-drama "The Best Exotic Marigold Hotel" in 2012. The film was ranked among the highest-grossing specialty releases of the year and Dench earned a Best Actress nod from the Golden Globes, as well as the British Independent Film Awards. In 2012, "Skyfall" became the highest-grossing film of all time in the UK and the highest-grossing film in the James Bond series. Critics overwhelmingly praised Dench's performance in the film.

In 2013, Dench starred as the title character in "Philomena." She received her seventh Oscar nomination for her role. Dench then reprised her role of Evelyn in "The Second Best Exotic Marigold Hotel." Dench was then cast in Tim Burton's dark fantasy film "Miss Peregrine's Home for Peculiar Children." It became a commercial hit, grossing nearly $300 million worldwide.

Dench's first film of 2017 was the historical drama "Tulip Fever." Dench earned her 12th Golden Globe nomination for her role of Queen Victoria in 2017's "Victoria & Abdul." Her last film that year was "Murder on the Orient Express," based on the 1934 Agatha Christie novel of the same name. In 2018, Dench was cast in "Red Joan." While the film earned generally negative reviews, Dench was lauded for her performance. Her other film of 2018 was the fictional historical film "

In 2019, Dench presented a two-part nature documentary series for the ITV network called "Judi Dench's Wild Borneo Adventure," in which she traveled across the United Kingdom, looking at its remarkable wildlife and efforts by conservationists to preserve it for future generations. In 2019, Dench starred in "Cats" alongside Jennifer Hudson and James Corden. The film was met with overwhelmingly negative critical reviews and was a box office bomb. In 2020, Dench appeared in the science fantasy adventure film "Artemis Fowl." She also appeared alongside Eddie Izzard in the war drama film "Six Minutes to Midnight." In 2020, Dench is slated to appear in the comedy "Blithe Spirit."

Personal Life: Dench married actor Michael Williams and they remained together until his death in 2001. They have a daughter, Finty Williams, who was born in 1972. She has a grandson named Samuel (b. 1997.) Dench has been in a relationship with conservationist David Mills since 2010. The couple met when Mills invited her to open a squirrel enclosure at the wildlife center he runs near her home in Surrey.

Dench was appointed Officer of the Order of the British Empire (OBE) in 1970. She is the Patron and President of the alumni foundation Drama Studio London. It was revealed in the late '90s that Dench was the patron of over 180 charities, many of them related to theater or medical causes like York Against Cancer. She is also the long-standing and active Vice President of the national disabled people's charity Revitalise. 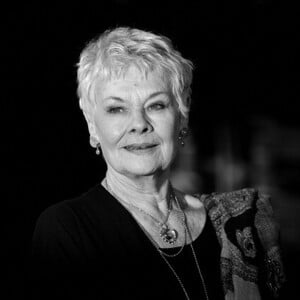