What Is Judah Friedlander's Net Worth and Salary?

Judah Friedlander was born on March 16, 1969, in Gaithersburg, Maryland. His mother, Shirley, is Croatian American, and his father, Art, was of Russian Jewish heritage. During his childhood, Judah made animated movies, designed his own t-shirts, and drew political cartoons. He attended New York University, and at age 19, he performed stand-up comedy for the first time. Friedlander graduated from NYU's  Gallatin School of Individualized Study.

Judah has said that he prefers stand-up to acting, and while starring on "30 Rock," he performed stand-up comedy a few nights per week in New York City. In a 2012 interview with "City Pages," he stated, "My two biggest goals right now are to release my own double album of stand-up, and to put out my own stand-up concert DVD. I've actually been doing stand-up since 1989, and it's still the most important thing I do from an artistic standpoint." In 2007, Friedlander was featured in "Heeb" magazine's "100 people you need to know about" list. Judah made his television debut on "The Jim Breuer Show" in 1998, and in 1999, he guest-starred in three episodes of Al Franken's NBC sitcom "LateLine." In 2000, he played a wrestling fan in the film "Endsville" and a pharmacy clerk in the Ben Stiller-Robert De Niro comedy "Meet the Parents," and he guest-starred on "Spin City" and "The Beat." Friedlander reunited with Stiller in 2001's "Zoolander" and 2004's "Starsky and Hutch" and "Along Came Polly." He played Ronald von Kleinstein in 2001's "Wet Hot American Summer," and he reprised his role in two episodes of the Netflix series "Wet Hot American Summer: First Day of Camp" in 2015. Judah appeared in the films "How High" (2001), "Showtime" (2002), "The Trade" (2003), "The Janitor" (2003), and "Bad Meat" (2004), and he co-starred with Will Ferrell, Luke Wilson, and Vince Vaughn in 2003's "Old School." He played Toby Radloff in 2003's "American Splendor," which earned him an Independent Spirit Award nomination," and he won an award at the BendFilm Festival for 2005's "Duane Hopwood." That year he also appeared in the films "Southern Belles," "Pizza," "The Unseen," and "Feast." Friedlander guest-starred on "Curb Your Enthusiasm" (2004) and "Wonder Showzen" (2006), and in 2006, he appeared in "The Darwin Awards," "Date Movie," "Live Free or Die," "The Cassidy Kids," and "Full Grown Men." From 2006 to 2013, he played Frank Rossitano on "30 Rock" alongside Tina Fey, Alec Baldwin, Tracy Morgan, and Jane Krakowski. The series aired 139 episodes over seven seasons and earned numerous awards, including three Primetime Emmys for Outstanding Comedy Series and a Golden Globe for Best Series – Musical or Comedy. While starring on the critically-acclaimed show, Judah also appeared in the films "Chapter 27" (2007), "Feast II: Sloppy Seconds" (2008), "Meet Dave" (2008), "I Hate Valentine's Day" (2009), "Cabin Fever 2: Spring Fever" (2009), and "Beware the Gonzo" (2010) and guest-starred on "Flight of the Conchords" (2007), "Sesame Street" (2010), and "The Heart, She Holler" (2011). He played Scott Brumberg in the 2008 Academy Award-nominated film "The Wrestler," and in 2009, he hosted "100 Greatest One Hit Wonders of the 80s." Friedlander portrayed "Weird" Al Yankovic in a 2013 episode of "Childrens Hospital," and in 2014, he appeared in the film "Ping Pong Summer" and the Syfy Channel movie "Sharknado 2: The Second One." He reprised his role in 2018's "The Last Sharknado: It's About Time." In 2015, Judah played a bar patron in "Star Wars: The Force Awakens" and guest-starred on "Fresh Off the Boat" and "The Jim Gaffigan Show," and the following year, he voiced Sanford Buckwald on the Fox series "Bordertown." In 2017, he guest-starred in two episodes of "Unbreakable Kimmy Schmidt," which was created by Tina Fey, and he appeared in the romantic comedy "Can You Keep a Secret?" in 2019. Friedlander is also known for playing "the hug guy" in the 2001 Dave Matthews Band music video "Everyday," and he has said that strangers would offer him hugs for years afterward.

Judah has spent most of his career living in New York City, and in 2013, he revealed that he had been sleeping on an air mattress for months because his Queens apartment had "mold and musty problems" and he didn't want to contaminate a regular mattress and move it to a "new apartment that's not polluted." Friedlander has said that his favorite sports are ping-pong and soccer. He played ping-pong competitively as a child, then got back into it while he was starring in "30 Rock." Judah told "The Hollywood Reporter" in 2012, "When I can, I play official tournaments sanctioned by USATT.org. And I play ping-pong several times a week even though I don't own a table. It's fun, relaxing and great exercise. And it's not showbizzy. I like hanging out at non-showbizzy places. I travel with my ping-pong paddle." He is a supporter of the soccer team the New York Red Bulls, and he's a fan of professional wrestling.

In 2005, Friedlander won a Jury Prize for Best Supporting Actor – Male for "Duane Hopwood" at the BendFilm Festival, and the previous year, he earned an Independent Spirit Award nomination for Best Supporting Male for "American Splendor." Judah and his "30 Rock" castmates shared seven Screen Actors Guild Award nominations for Outstanding Performance by an Ensemble in a Comedy Series, winning in 2009. The "30 Rock" cast also received two Gold Derby Award nominations for Ensemble of the Year (2008 and 2009). 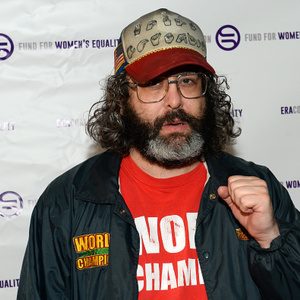