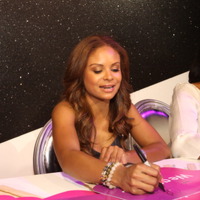 Joyful Drake net worth: Joyful Drake is an American actress who has a net worth of $2 million. Joyful Drake was born in Milwaukee, Wisconsin in September 1976. One of her best known roles came starring as Tasha Woodson on the television series Let's Stay Together from 2011 to 2014. Drake has also had recurring roles on the TV series Soul Food as Tamara in 2001, Cuts as Lani in 2005, and The Quad as Venus Hardwick in 2018. Joyful Drake has starred in several movies including The Look, Hair Show, Beauty Shop, Phat Girlz, Tournament of Dreams, Get Him to the Greek, Bad Ass, Catch Hell, and November Rule. She has also appeared in episodes of the TV series One on One, The Game, The Exes, Jane the Virgin, and Lethal Weapon. Joyful Drake starred in the TV movies Glass Heels and Chasing Waterfalls and in the short The Black Bachelor.