Mama Joyce has been an incredibly devoted mother to Kandi and has been a support system for Kandi throughout her life. She is usually an extremely likable component The Real Housewives of Atlanta seasons, and has won the hearts of many of the viewers and other cast mates on the show. The mother and daughter pair are quite close, and spend a lot of time together with Kandi's daughter, Riley. Along with Mama Joyce's hands-on approach to parenting comes an outspoken and critical side of Mama Joyce, especially when it comes to Kandi's relationships. She has a history of disapproving of Kandi's choice in men and has again expressed mistrust of Kandi's new husband, Todd Tucker, who she believes is an opportunist and is using Kandi for her money. Kandi wrote a musical called, A Mother's Love, which is loosely based on her relationship with her mother. The production, behind the scenes discussions, and portions of opening night were shown on Season 6 of The Real Housewives of Atlanta. Mama Joyce is a native of Atlanta, and the youngest of 14 children. She was a former telecommunications professional and is a divorced mother of two. Her son (and Kandi's brother), Patrick, was killed in a car accident when he was 22 and it rocked the family to the core. Two years before Patrick's passing, she retired from her decade-long career after undergoing spinal surgery. She is currently on disability and Social Security, and has a rental property in her name. She is not paid for her appearances on the show, and has recently had to hire a publicist to help control some of the negative attention she has been receiving because of her very public feud with her daughter over her relationship with Todd Tucker. 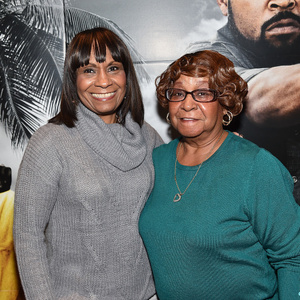