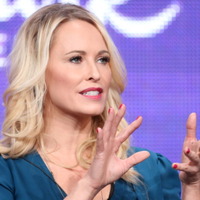 Josie Bissett net worth: Josie Bissett is an American actress who has a net worth of $3 million. Josie Bissett was born in Seattle, Washington in October 1970. Bissett is best known for playing the role of Jane Mancini on the television series Melrose Place. At 12 years old she started modeling and did ads and television commercials. Bissett moved to Japan at 16 and to Hollywood, California at 17. She first appeared in the film Paura nel buio in 1989. From 1990 to 1991 she starred as Cara on the TV series Valerie. Her best known role came starring as Jane Andrews Mancini in the series Melrose Place from 1992 to 1999. From 2008 to 2013 Bissett starred as Kathleen Bowman on the TV series The Secret Life of the American Teenager. She has also starred in the movies The Doors, Halfway House, Mikey, I Do, They Don't, and Paper Angels. Bissett has also appeared in episodes of the TV series Quantum Leap, Doogie Howser, The Hogan Family, P.S. I Luv U, Burke's Law, and Law and Order: SVU.