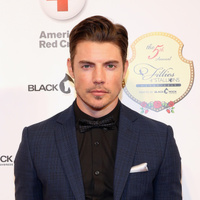 Josh Henderson net worth and salary: Josh Henderson's net worth is $2.5 million dollars and his salary per episode of Dallas is $50,000. Born in Dallas, Texas, Josh Henderson first came to public attention when he competed on the second season of the WB's reality singing competition, "Popstars: USA". His singing group, Scene 23, ultimately won the competition, and released one album. They were not particularly successful, however, and the group broke up soon after the album was released. He then shifted his focus to acting work, and has since guest-starred, or co-starred, on a number of shows, including "Do Over", "Maybe It's Me", "One on One", "She Spies", "North Shore", "8 Simple Rules…", "90210", and "CSI: Crime Scene Investigation". He has also appeared in such films as, "Yours, Mine, and Ours", "Step Up", and "April Fool's Day". He became a household name appearing on the hit show, "Desperate Housewives", and is currently starring as John Ross Ewing III, on the new continuation of the popular nighttime soap, "Dallas".