Josh Duhamel Net Worth and Salary: Josh Duhamel is an American actor and former fashion model who has a net worth of $18 million dollars. Josh Duhamel has worked on many projects in both television and film. Some of his notable early roles include a stint on the soap opera, "All My Children", as well as the "Transformers" film franchise.

Early Life: Joshua David Duhamel was born in Minot, North Dakota, on November 14, 1972. His mother worked as a teacher and is also a local businesswoman, and his father is an advertising salesman. After his parents divorced when he was young, he grew up with his three sisters, Ashlee, Kassidy, and Mckenzie, with their mother. He has remained close with his father as well though. Duhamel is of French-Canadian, Irish, English, Austrian, German, and Norwegian descent.

Duhamel attended Minot State University in his hometown of Minot, North Dakota. While there, he was the university's quarterback on the football team. His original plan was to attend dental school, but he actually ended up dropping out of college with just one-and-a-half credits left to complete in order to receive his undergraduate degree. He later returned and completed his remaining credits, receiving his degree in 2005. Instead of finishing college, in his own words he "followed an ex-girlfriend to northern California".

Career: Once in California, Duhamel began his career as a model. He won the an International Modeling and Talent Association (IMTA) competition in 1997 that named him Made Model of the Year (incidentally, the runner-up of that competition was actor Ashton Kutcher). His first acting roles were in music videos; he was an extra in the video for Donna Summer's song "I Will Go With You (Con te partiro)" (1999) and Christina Aguilera's "Genie in a Bottle" (1999). Then, after training with Scott Sedita Acting Studios, he won the role of Leo du Pres on the ABC soap opera "All My Children". In his role as Leo du Pres, the love interest of Rebecca Budig's character Greenlee Smythe, Duhamel garnered lots of public interest—he and Budig actually were nominated in 2003 at the Daytime Emmy Awards for the Special Fan Award for America's Favorite Couple. For his work on "All My Children", he also received nominations for the Daytime Emmy Award for Outstanding Supporting Actor in both 2001 and 2003, and actually won the award in 2002.

In 2004, Duhamel debuted in his first film role in the movie "Win a Date with Tad Hamilton!". He followed this up with starring roles in the film "Turistas" (2006), a thriller co-starring Olivia Wilde. He has since gone on to enjoy an incredibly successful acting career in the film industry, starring in popular films like "Transformers" (2007), a summer blockbuster film with Steven Spielberg as the executive producer; the three subsequent "Transformers" franchise sequels, "Transformers: Revenge of the Fallen" (2009), "Transformers: Dark of the Moon" (2011), and "Transformers: The Last Knight" (2017); romantic comedy "Life as We Know It" (2010) with Katherine Heigl; "When in Rome" (2010); "Safe Haven" (2013), alongside Julianne Hough and Cobie Smulders; the drama "You're Not You" (2014), as the husband of Hilary Swank's character; "Love, Simon" (2018), a film based on Becky Albertalli's novel "Simon vs. the Homo Sapiens Agenda" (2015); and the sci-fi comedy drama "Think Like a Dog" (2020), alongside Megan Fox, among many others.

He has also lent his voice to several characters as a voice actor, including on animated shows like "The Replacements" (2008), "Fanboy & Chum Chum" (2009-2012), and Jake and the Never Land Pirates" (2012-2015), as well as documentaries like "Planet Ocean" (2012) and the series "Bomb Patrol Afghanistan" (2011-2012). Additionally, he provided the voice of the character High Volt in the video game "Skylanders: SuperChargers" (2015), and provided the voice and performance capture for the character Technical Sergeant William Pierson for the video game "Call of Duty: WWII" (2017).

Other Projects: In 2005, Duhamel became the co-owner of a restaurant in his hometown of Minot, North Dakota, called 10 North Main. In support of his home state, Duhamel has also done promotional work for the North Dakota tourism bureau. In 2018, he starred in a Taco Bell commercial for their Web of Fries menu item, featuring Mexican spiced fries with nacho cheese sauce.

Personal Life: In September 2004, after the band The Black Eyed Peas appeared on Duhamel's show "Las Vegas", Duhamel began dating bandmember Fergie (real name Stacy Ann Ferguson). They got married in January 2009, in Malibu, California. However, they announced their separation in 2017, filed for divorce in June 2019, and finalized their divorce in November 2019. They share a son together, Axl Jack Duhamel, born in August 2013. Duhamel is known for being a practicing Catholic, and he attends church regularly.

Real Estate: In 2007, Fergie and Josh paid $4.875 million for an 8,232 square foot home in the Brentwood area of Los Angeles. After their split, Duhamel bought a new home in Encino, California for $2.65 million. 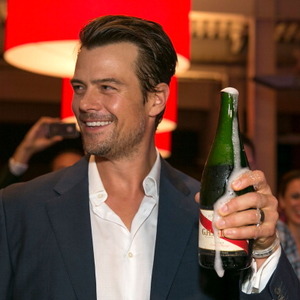