Joseph Fiennes Net Worth and salary: Joseph Fiennes is a British actor who has a net worth of $10 million dollars. He was born Joseph Alberic Twisleton-Wykenham-Fiennes on May 27, 1970 in Salisbury, Wiltshire, England. Joseph Fiennes's brother is actor, Ralph Fiennes.

After attending a private school, Fiennes began studying theatre and spent three years at the Guildhall School of Music and Drama, which he graduated from in 1993. Joseph's most notable films include Shakespeare in Love, Elizabeth, Enemy at the Gates, Luther, Camelot, and FlashForward. On the small screen he has received critical praise for his role on the Hulu series The Handmaid's Tale which began in 2017. He also stared in the second season of the highly acclaimed American Horror Story.  Throughout his career, he's been able to find notable work in traditional or theater-based roles. He has been married to Maria Dolores Dieguez, who is a French model since August of 2009. The pair wed in Tuscany in a traditional Roman Catholic ceremony and have two daughters. For his role on The Handmaid's Tale, Joseph was nominated for the 2017 Screen Actor's Guild award for Outstanding Performance by an Ensemble in a drama series. 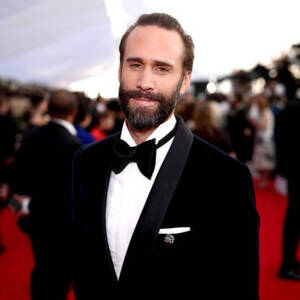