Jordan Klepper Net Worth: Jordan Klepper is an American comedian and television correspondent who has a net worth of $2 million dollars. Jordan Klepper was born in Kalamazoo, Michigan. He started out working as a comedian for the Big Ten Network on the TV series Big Ten Friday Night Tailgate.

He moved to Chicago, Illinois after graduating from Kalamazoo College. Klepper performed with Second City before moving to New York City in 2011 to perform with the Upright Citizens Brigade. He debuted on The Daily Show in March 2014 as a correspondent. Klepper produced, wrote, and starred in the 2011 video shorts Tmi and Bone Dry. In 2012 he starred in the film Ex-Girlfriends. Klepper starred in and wrote the 2014 short Peepers. Klepper eventually left The Daily Show and began hosting his own show called The Opposition with Jordan Klepper which also airs on Comedy Central. 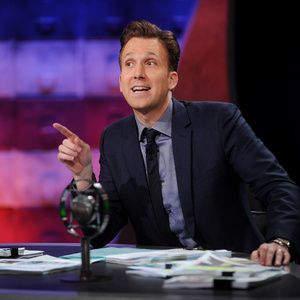