Jools Holland net worth: Jools Holland is an English pianist, bandleader, singer, composer and television personality who has a net worth of $5 million. He is best known for performing with the musical groups Squeeze, The The, and Jools Holland's Rhythm and Blues Orchestra. Throughout his career he has worked with several high-profile artists including Sting, Eric Clapton, Mark Knopfler, George Harrison, David Gilmour, Magazine, and Bono. He was born Julian Miles Holland in 1958 in Blackheath, South East London. By the age of 8, he could play the piano fluently by ear, and by the time he reached his early teens he was proficient and confident enough to be making regular appearances in South East London and the East End Docks. He is now a seasoned and well-known musician who is also a published author and has appeared on various television and radio shows throughout his career. Since 1992, he has hosted Later…with Jools Holland, which is a music-based show that is aired on BBC2. In 2005, he married Christabel McEwen, his girlfriend of 15 years. The wedding was attended by many of the couple's celebrity friends including: Ringo Starr, Robbie Coltrane, Stephen Fry, Lenny Henry, Noel Gallagher, Dawn French, and Jennifer Saunders. Holland has two children with his first partner, Mary Leahy, and two more children with Christabel McEwen. He lives in the Westcombe Park in South East London and owns a second home that was built in the medieval ruins of Cooling Castle in Kent. In 2003, he received an OBE in the Queen's Birthday Honours list for services to the British music industry as a television presenter and musician. In 2006, he was appointed a Deputy Lieutenant for Kent and an Honorary Fellow of Canterbury Christ Church University in 2009. 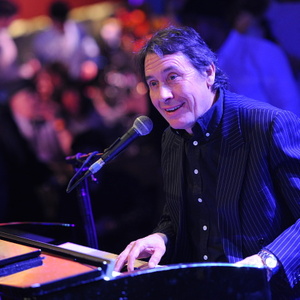