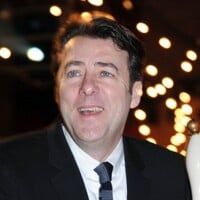 Jonathan Ross Net Worth: Jonathan Ross is an English radio and TV presenter who has a net worth of $35 million. To date, he is probably best known for presenting his own chat show on BBC titled, "Friday Night with Jonathan Ross". He was born Jonathan Stephen Ross on November 15, 1960 in a part of London called Camden Town. Ross was the son of a lorry driver and a mother who was a film extra. After high school he went on to study Modern European History at the University of London. Upon graduation, Jonathan started his TV career as a researcher. Later on, he was given the opportunity to host his own show which was called "The Last Resort with Jonathan Ross". The show was broadcast on channel 4. In the following decade he hosted several TV and radio shows of which many were produced by his company Channel X. In 1987 he decided to sell his part of the company and started to work for the BBC. In the beginning, he served as a radio show host and film program presenter. After two years with the network, he started his famous show "Friday Night with Jonathan Ross". The show turned out an enormous success and it brought him three BAFTA awards as well as an invitation to the OBE for his contributions to broadcasting. In his career he has been surrounded by many controversies. In 2008, he published his semi-autobiography in which he tries to share some light on some of life story. The book was called "Why Do I Say These Things". Jonathan has been married to Jane Goldman since 1988. Together, they have three children. They also own a TV production company together called Hotsauce TV. He is a passionate comic book collector and has even penned his own comic books called "America's Got Powers" and "Turf".