Jonathan Groff net wort and salary: Jonathan Groff is an American actor and singer who has a net worth of $5 million. He is probably best-known for his voice work in the "Frozen" film franchise and for his starring role on the Netflix series "Mindhunter".

Jonathan Groff was born in Lancaster, Pennsylvania in March 1985. In addition to film and television Groff is well known for acting in theater. He was nominated for a Tony Award at 22 years old for his role as Melchior Gabor on Broadway's Spring Awakening. He won an Obie Award for starring in Prayer for My Enemy and The Singing Forest off-Broadway. He has also starred in the West End's revival of Deathtrap. On screen he first appeared in the television series Pilot Season in 2004. In 2007 Groff starred as Henry Mackler in the soap opera One Life to Live. He starred as Jesse St. James in the TV series Glee from 2010 to 2012 and as Ian Todd in the TV series Boss in 2012. From 2014 to 2015 he starred as Patrick Murray in the series Looking. Groff has also starred in the movies Taking Woodstock, The Conspirator, and American Sniper. In 2014 Groff won a NewNowNext Award for Best New Television Actor. He has also had many songs chart as part of the Glee cast.

Frozen: In 2013, Jonathan voiced the role of Kristoff in the smash-hit Disney film Frozen. He reprised the role for the 2019 sequel.

Mindhunter: Since 2017, Jonathan has starred on the Netflix crime drama Mindhunter. 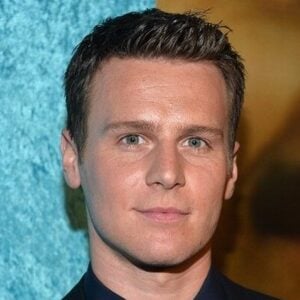