Jonathan Goldsmith Net Worth and Salary: Jonathan Goldsmith is an American actor who is perhaps best-known for his role as "The Most Interesting Man in the World" in a series of advertisements for Dos Equis brand beer. Jonathan Goldsmith has a net worth of $8 million. In addition to his net worth, he has earned the pride that accompanies creating a beloved character, which is an honor that few actors in any medium achieve. Way back in 1966, Goldsmith moved to Los Angeles to pursue a career in acting. During this time, Goldsmith had to work a series of odd jobs in order to make a living, before eventually establishing himself as an actor in westerns. He was a series regular on the show Gunsmoke.

One of his most notable appearances in this genre is in the 1976 movie The Shootist, which was the final film of western movie legend John Wayne. In the movie, Goldsmith appears as a character that is shot squarely between the eyes by Wayne – the scene was done by firing a special dye cartridge at Goldsmith's face in order to create the bloody visual. Goldsmith also made guest appearances on a variety of television shows, including The A-Team, Murder, She Wrote, and The Fall Guy.

Dos Equis: In 2007 Goldsmith began appearing in what became his signature role, that of "The Most Interesting Man in the World", in a series of Dos Equis beer commercials. He held the role until 2016. At his peak he was paid $2 million per year to be the company's spokesman on and off camera at public events. 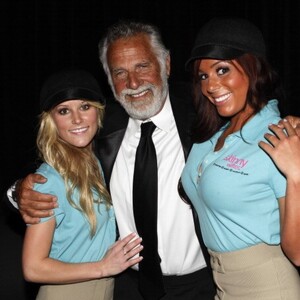